Chinese Vice Premier, Wang Yang, is set to visit Uganda this week for a four-day state visit. The Chinese leader will arrive in Uganda on June 13 and is expected to hold bilateral discussions with President Yoweri Museveni and other government leaders.

His visit follows an invitation extended by President Museveni.

Wang Yang, 63, is the Chairman of the Chinese People’s Political Consultative Conference and he is one of the four Vice Premiers of China in Premier Li Keqiang’s government. He previously served as the Secretary General of the Communist Party of Guangdong province.

He is number four in the leadership hierarchy of the Republic of China.

The Permanent Secretary in the Ministry of Foreign Affairs, Ambassador Patrick Mugoya told journalists on Tuesday that during the visit, H.E Wang Yang will hold meeting with President Museveni, and later, he will also meet with the Vice President.

He will hold discussions with Prime Minister, Dr Ruhakana Rugunda and the Speaker of Parliament, Rt Hon Rebecca Kadaga.

In addition, H.E Wang Yang will commission the 53km Kampala – Entebbe express way which was funded by Chinese government. During his stay, Yang will also visit the Liaoshen industrial park situated in Kapeeka, Nakaseke district.

“The visit to Kapeeka is for the Chinese leader to see how Chinese support and investment are taking root and how this can be replicated elsewhere in the country,” Mugoya said.

The Chinese leader will together with Vice President, Edward Kiwanuka Ssekandi preside over the Dragon Boat Race in Entebbe.

Ambassador Mugoya said this visit comes at the backdrop of “historical and excellent bilateral relations between Uganda and China”.

“Our relations have been growing from strength to strength and this is exemplified through inter alia China’s support towards Uganda national development in infrastructure and other fields,” Ambassador Mugoya said at a press conference at the Ministry of Foreign Affairs.

Such visits promote mutual understanding and support on bilateral, regional and international issues of mutual interest, he said.

Asked what areas the talks between H.E and President Museveni will cover, Ambassador Mugoya said it was likely to touch on among other issues, the upcoming Forum on China-Africa Cooperation (FOCAC) summit in Beijing this September and what more Uganda can benefit from this relationship. 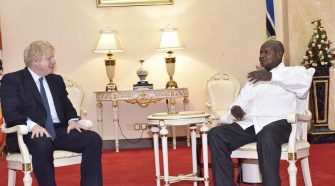