Parliament’s Director of Communication and Public Affairs, Chris Obore has finally been locked out of office and sent on forced accumulated leave.

Obore was shocked when he turned up for work on Friday only to find out that he could not access his office after the door locker had been changed by the Sergeant-at-arms.

Obore had Wednesday received a letter from the Clerk to Parliament, Jane Kibirige, informing him that she had been instructed to send him on accumulated leave of five years with immediate effect.

The letter was copied to the Speaker of Parliament, Deputy Speaker, Deputy Clerks, Director Human Resource and Director Finance.

Obore’s lawyers have since written to the Clerk to Parliament protesting the unlawful move to send their client on forced leave despite a pending court case over the same matter.

The Public Service Standing Orders further stipulate that in the event that a public officer is sent on forced leave or interdicted or temporarily removed from office, then he or she shall be informed of the reasons for such interdiction.

However, the Clerk did not specify any reason as to why Obore was being sent on such a long forced leave.

It should be remembered that Obore secured a court injunction over the move by the Clerk of Parliament to have his five year contract terminated.

On March 18, 2019, Obore received a letter terminating his services at Parliament from the Clerk to Parliament and was required to handover office within 15 days.

In the letter, the Clerk noted that the decision to have his job terminated followed a report from the Inspector General of Government (IGG) that had undertook an investigation into how Obore was procured for the job.

It is rumored that the report exposed a lot of irregularities and illegalities that were perhaps committed by the commission in hiring Obore’s services and Obore did not play in his recruitment neither was he part of those who set out the process procedure.

In his affidavit, Obore told Court that in May 2015, he received a letter from Parliament commission forming him that they were in the process of filling a position of Director Communications and public affairs, and that he had been identified as a suitable candidate for the position before sitting for interviews over the same.

Obore adds that on August 19, 2015, he received a letter from the Clerk informing him that he had been appointed on probation which he served until he was confirmed for the position in which he has since served.

It is not clear the clerk had Obore locked out of office despite Court ordering her to maintain the status quo until the case is fully determined. The clerk sites superior orders. It is speculated that the clerk received orders from Speaker Rebecca Kadaga. 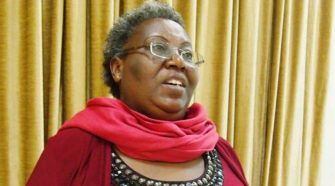