MultiChoice Uganda has launched Christian focused television network, Channel 44 on the DSTV platform. Channel 44 which is under Pastor Robert Kayanja’s Miracle Centre ministries premiered on DSTV on Thursday and will be accessed on channel 297.

Multichoice Uganda General Manager Charles Hamya said that it follows the growing demand for Channel 44’s popular ’77 Days of Glory’ series along with continuous demands from DSTV subscribers to have the channel on the platform.

“We already have a wide offer of divine lifestyle channels and we know that they are very popular among our subscribers,” Hamya said.

“We are very happy to welcome Channel 44 to our channel line-up – it’s a unique Christian gospel channel targeting everyone interested in the growth of their spiritual wellbeing,” he added.

Expressing his delight over the milestone, Pastor Robert Kayanja, the CEO and founder of Channel 44 described it as exciting.

“This partnership shall help Channel 44 reach out to more people and spread the gospel for the spiritual growth of many Ugandans which is a powerful prospect for us. We urge all our followers to subscribe and receive the word of the Lord wherever they are,” Pastor Kayanja said.

The development will enable Channel 44 to expand its television audience beyond the current 84 million viewers, Pastor Kayanja revealed.

“We are honored and excited that what our audience has been asking for a long time since we started 77 Days of Glory has come to happen.”

The channel broadcasts gospel content from Uganda and around the world including sermons from renowned televangelists Pastor Joyce Meyer and Pastor Creflo Dollar and also covers some of the best African mega worship music from Uganda and the rest of Africa under the program Gospel Afrik.

The popular program 77 days of Glory will also feature on channel 44’s line up.

At the same launch held at the Multichoice headquarters in Kololo, Kampala, the company announced a promotion that will see DSTV kits slashed by Shs 32,000 in the next month. The offer stands for only customers that will purchase kits from Pastor Kayanja’s Miracle Centre Cathedral in Rubaga. 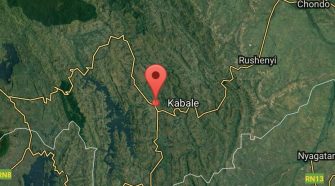