Uganda among other African countries has been called upon to fast track the ratification of the African Charter on Democracy, Elections and Governance (ACDEG) which serves as a lasting solution to all Africa’s problems.

The call was made during an engagement between members of Parliament and civil society organisations advocating for the charter which among others include; Institute of Parliamentary Studies, The Africa We Want, Open Society Foundations and the African Parliamentarians Network Against Corruption (APNAC).

The ACDEG was adopted by the African Union (AU) at the 8th AU Ordinary Session in 2007 and came into force in 2012.

According to the advocates, the coming into force of the ACDEG signified a positive step signalling a new dawn of democracy rooted in the rule of law given the fact that Africa is a continent renowned for military coups, counter-coups and civilian dictators.

The charter symbolizes the ultimate yearning of the universal values and principles of democracy and respect for human rights premised upon the supremacy of the constitution and constitutional order by African peoples and respective state parties.

The overall aim of the charter is to re-inforce the commitment of the AU Member States towards the promotion and consolidation of democratic governance and human rights on the continent.

The Manager, Global Platform, Primus Bahiigi Atukwatse said during the engagement that Uganda is party to and has signed a number of continental and regional instruments, however she is yet to ratify the ACDEG.

Atukwatse said that ACDEG is a milestone for democracy in Africa, stating the minimum requirements for the observance of democratic principles and its ratification and implementation is imperative to the attainment of peace and security, protection of human rights and effective democratic governance in Africa.

Atukwatse noted that once Uganda ratifies the charter, the uncertainty of how power should transit from one person to another would be addressed and resolved.

“The charter will help to enhance the quality of elections in the country; in 2012, AU came up with agenda 2063 which defines the Africa we want by that year, this is very hard to achieve with no quality elections,” Atukwatse said.

He added that the ratification of the charter will help in the deepening of Human Rights, Rule of Law and Democracy.

During the meeting, the legislators appreciated the charter and noted that they will add their voice in calling upon government to have it ratified and will champion the domestication of its provisions during their legislation process.

They however noted that the charter is good but questioned the political will by Africa’s sitting governments to build strong institutions that can help achieve the objectives.

“When you look at what the Charter has, we have it in our constitution and that means it has been domesticated but what we need is to build institutions because they guarantee the enforcement and implementation of the constitution,” noted MP Sam Bitangaro. 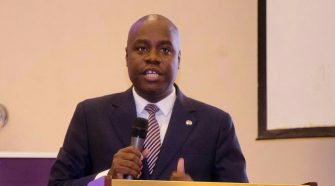 Law Society Asks Security Agencies to “Rise Up to the Challenge”