In the latest major adjustments made since he took over the Command of Police, IGP Okoth Ochola has restructured units and Directorates in what could be seen as a move to iron out the inefficiencies that have bedeviled the Force.

The changes are contained in a March 18 internal memo by IGP Ochola which is issued to all Police Units.

Part of the changes include merging the Directorate of Oil and Gas with that of Counter Terrorism to make the Division of Oil and Gas.

In the same restructuring, the Police Flying Squad unit which undertakes operations on sophisticated crimes has been reverted to the Directorate of Criminal Investigation and Crime Intelligence (CID).

CID will henceforth also supervise the Special Investigations Unit (SIU) whose former commander, Nixon Agasirwe is now together with 8 others facing charges of kidnap and unlawful possession of military arms, in the military court martial.

The changes which are titled ‘Force Reorganization’ will according to the new IGP take immediate effect and accordingly, Ochola has directed the commissioner Human Resource Management to fast track the changes with the Ministry of Public Service.

Police’s Cyber Unit, charged with policing cyber related crimes has also been put under the supervision of the Directorate of Forensic Services.

Still in the communiqué, the IGP ordered that Criminal Case File Tracking Task Force (CCTF), and Surveillance all be reverted under the supervision of CID. The Territorial Police Command (Region and District/Division) has also been placed under the Directorate of Operations.

“All concerned Directorates to provide reports on the reorganization process within one week,” Ochola directed in the memo.

The changes come barely a day after the Police Chief effected a reshuffle of Police officers including those at Senior ranks, the latest of a series of transfers and appointments since he took office.

It is believed that the mass adjustments are in line with cleaning up the Police which President Yoweri Museveni has previously said was infiltrated by criminals. 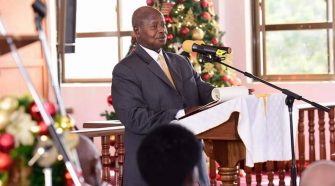