Musicians A Pass and Bebe Cool have for the last couple of months had squabbles both online and during talk shows where both of them are featured, and it just keeps getting interesting by the day.

From dissing each other’s songs, to daring themselves and each claiming they are heavier in the music industry. Only themselves know whether these antics are serious or one of the many stunts artistes use to promote their music.

A Pass has a new album out, while Bebe Cool has an upcoming concert, so on either side, there is a possible motivation.

Their latest ‘beef’ is even more hilarious.

Last week, Bebe Cool attended a press launch for the upcoming Goat Race scheduled for August at Speke Resort Munyonyo, where he bought a goat at Shs 1 million. But that’s not the funny part. He named his goat ‘A Pass’.

“I am naming my goat A Pass,” the Gagamel boss said during the auctioning saying the goat resembled A Pass.

It took the ‘Didadada’ singer about 3 days to respond to the rather insulting stunt.

Now, A Pass has said that what Bebe Cool implied by calling him a goat was that he is the Greatest Of All Time, another way of filling the initials in the word GOAT.

“Someone called me a goat, but don’t be blind, he meant am The Greatest Of All Time. He has never seen a talented artist like me,” A Pass posted on social media on Monday.

Remeber the saying that goes ‘When life gives you lemons, make lemonade’? That’s typically what A Pass did. For now, it seems A Pass won this round, as the fans get to wait for the next one. 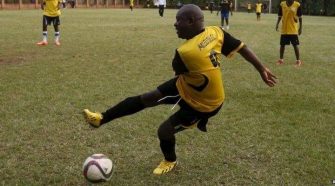