Top Ugandan comedians are the latest to weigh in on the ongoing controversial debate involving seven-year-old singer, Fresh Kid and the Minister in charge of Youth and Children Affairs, Nakiwala Kiyingi which has left public opinion divided.

The young child whose debut hit ‘Bateeka’ took the country by storm a few weeks ago has been making headlines and doing a circuit of interviews on TVs and the media. He has equally performed at numerous events. Many are still coming to terms with the level of finesse Fresh Kid is gifted with when they hear his lyrics and his delivery on the mic.

However, recently, the Minister issued a stern warning to the child, to stop pursuing his sprouting career in music and concentrate on school. She said that by working (singing) when the rest of the children are in school, Fresh Kid, real names Patrick Ssenyonjo violates labour laws and he could face juvenile prison.

But the Minister has since received a torrent of criticism from those that root for the young singer. They say Fresh Kid possesses a talent and it should be nurtured, especially in a country where jobs are hard to come by even for the well educated.

Now, top comedians in Uganda, including Patrick ‘Salvado’ Idringi, Alex Muhangi and funny duo Madrat and Chiko have added their voices to critics of Minister Nakiwala. They bashed government for doing little to invest in such talent as well as the entertainment industry as a whole.

“Our biggest problem is the education system. We have been raised to think that one has to go through Primary school, Secondary, University, then get a job. So, when a new case like that of Fresh Kid emerges, it shocks everybody that they all start condemning it,” Salvado said during a live Facebook broadcast by Alex Muhangi on Sunday.

The group is in Kigali, Rwanda where they performed at the Seka (comedy) Festival held over the weekend.

“You don’t fight talent. What government should do is wake up to this new reality and establish a school that specifically caters for kids who are talented in creative arts, sports and the others. Before we know it, we shall have about 10,000 young Diamond Platinumz in Uganda,” the comedian added.

Salvado is opposed the idea of killing the youngster’s natural gift in the name of pursuing education yet some people including himself (Salvado) have since hang their Degrees to follow their talent. What Fresh Kid needs is a sponsorship and better management, he said.

The comics made a mockery of how ridiculous it is that topics like Canadian prairies, Bachwezi dynasty and Maji Maji rebellion to date are still part of the education curriculum in Uganda, yet they are irrelevant in real life.

“Fresh Kid should be left to do his thing. Who even told them he isn’t attending school? Where do they find the problem? Your (Minister) children attend international schools and you are flown abroad for medical treatment”.

Alex Muhangi compared Fresh Kid to the likes of American rapper, Bow Wow who released his first music album at the age of 13. There should be no cause for suppressing Fresh Kid as long as he does not engage in acts like drinking alcohol while he is working, Muhangi says.

“It is this work that earns him the money for education,” he said.

Comedian Chiko says the Minister is only seeking relevance in the media and perhaps to pose as though her Ministry is doing serious work.

“This is a young boy. We should be questioning how at a tender age a child can be this talented. All these European soccer stars we support started playing at a young age. Same with the Ghetto Kids. You can never know what the future holds for Fresh Kid. His talent could turn out to be the source of income for his family in future”.

On his part, Madrat cited an example of platforms like ‘America Got Talent’ which have cast the spotlight on children to help them showcase their talent.

“First of all, the rate of unemployment is unbelievable in Uganda. There are many graduates doing casual work in bars and shops. Our youths are dying as slaves in foreign countries. Now a young kid from a poor family in Luwero comes up, but you want to pull him down,” a disturbed Madrat commented.

In their lengthy chat on the state of affairs within Uganda’s entertainment industry, the four criticized government for sidelining and underfunding the industry unlike countries like Nigeria.

“Countries like Nigeria have a separate Ministry in charge of Culture. Concentration is all fixed on entertainment – drama, music and comedy. But in our case, entertainment is competing with gender. How is that possible? Gender is the priority. All the funds, all NGOs are focused there,” said Salvado.

He also castigated top singers like Jose Chameleone, Bebe Cool and Ragga Dee who during a previous meeting between artists and President Yoweri Museveni resorted to presenting personal problems rather than tabling issues that affect the entire industry. 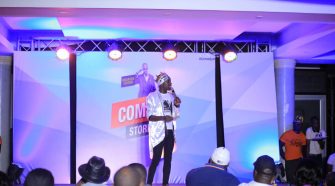