The commercial court in Kampala has given city tycoon Sudhir Ruparelia and Bank of Uganda 60 days within which to resolve their issues before the case file is allocated to a judge.

On Tuesday this week commercial court judge, David Wangutusi appointed city lawyer Harriet Magala as a mediator in this case.

Bank of Uganda dragged Sudhir alongside his company, Meera Investments, for illegally transferring 46 crane bank’s branch titles into the names of Meera investments which again leased them to Crane Bank.

Mediation is a practice that was introduced by the judiciary to reduce on case backlog as well as promoting good rapport between the parties. When a suit is filed in any courts of law, the parties are given a chance to resolve their issues outside court with the help of an independent mediator.

On October 20th 2016, Governor Bank of Uganda, Professor Emmanuel Tumusiime Mutebile announced the take-over of the failing Crane Bank, whose liabilities he said grossly exceeded its assets and that it was insolvent. Crane Bank was later sold to DFCU Bank. 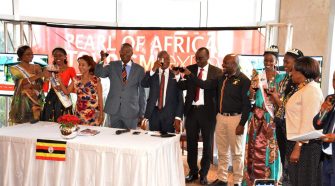