Parliament Commission through the Commissioner in charge of Finance and Planning, Peter Ogwang has come out to defend the decision to pay Over the Top (OTT) services tax and internet data bundles for legislators, despite an objection from the Speaker of Parliament, Rebecca Kadaga over the same.

On Thursday morning, Speaker Kadaga who is the head of the Commission told journalists she was not aware of the contract that was awarded to telecom giant, MTN Uganda for the provision of these services. She further revealed that she would commission an investigation into the matter.

Kadaga said she disagrees with the decision, adding that Members of Parliament (MPs) should be in position to pay for their OTT and not burden the tax payers.

Read More: I’m Not Aware of the MTN Contract, MPs Should Foot their OTT Tax – Kadaga

However, while addressing the media later on Thursday afternoon, Ogwang explained circumstances surrounding the move and justified the provision of these services on MPs’ Ipads.

The move is only aimed at facilitating the legislators to do their legislative business just like any other offices facilitate their workers, he said.

Ogwang labored to explain that the iPads that were given to MPs to support their work in Parliament come with a different sim cards which are not personal and that it is on these simcards that the data and OTT will be paid for easy access of Parliament proceedings.

He added that the iPads are gadgets to support the offices of the legislators and that they remain a property of the government.

In any case, once an MP ceases to occupy these positions, the services that Parliament provides on this gadget are terminated should the MP choose to purchase the iPad as personal property, Ogwang told reporters.

“The iPad the Member of Parliament has is an iPad of Parliament of Uganda. It is not personal. That is why in order to facilitate the work of the MP, Parliament is paying for that iPad. We are trying to move the MPs to be in-tandem with the changing world in the IT sector,” Ogwang said.

Asked whether Parliament work requires social media services including Twitter, Facebook, WhatsApp among others, Ogwang explained that MPs need these social platforms in order to keep engaging their constituents.

Parliament will at least spend Shs 16.5m per month in provision of internet and over the top taxes (OTT) for about 460 members of parliament on their iPads.

MTN Uganda will be providing a 5GB monthly bundle at Shs 30,000 and Shs 6,000 OTT tax for each MP’s device per month meaning that Parliament will spend Shs 36,000 for each MP per month. 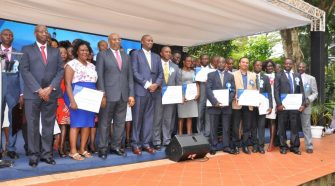