The Minister of State for Internal Affairs, Mario Obiga Kania has told Parliament that government has set up a Cabinet sub-committee that will manage the investigations surrounding the murder of late Ronald Sebulime.

The Minister made the remarks Wednesday while issuing a statement on the alleged assasination attempts on Minister for ICT, Ida Nantaba which led to the murder of Ronald Sebulime. Sebulime was later found to have been harmless to the  Minister.

Obiga said that the committee will be chaired by the Minister of Internal Affairs, Gen. Jeje Odong. It is mandated to establish whether indeed there was an attempt to assassinate minister Nantaba by the deceased or other perpetrators, the Minister said.

In his preliminary report to Parliament regarding the Ssebulime case, Obiga said that so far, a high level team of detectives from CID headquarters have been assembled to investigate the matter and have already taken statements from various witnesses.

“We have so far carried out arrests of Police officers including; Cpl Sali David, PC Opira Ronald, PC Bagonza Ronald, and they are being held as suspects in the murder of Ssebulime,” Obiga said.

Since the investigations are underway, the House could not debate this preliminary statement until the full report is out.

Ronald Ssebulime was killed after being arrested by Police on March 24. The incident came after Minister Nantaba had reported to Naggalama Police Station, a suspected attempt to assassinate her.

She alleged the attempt occurred while she was driving back to Kampala from Kayunga in her official motor vehicle registration number UG0037N, a Toyota Prado. 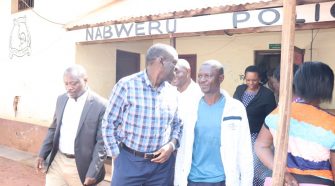