Drama ensued on Tuesday after the Minister of Health, Dr Jane Ruth Aceng, the Permanent Secretary in the Ministry of Health and Members of Parliament were blocked from inspecting the site for the proposed International Specialized Hospital in Lubowa.

The team of officials was led by the Chairperson of the Parliamentary committee on National Economy also former Minister of Finance, Syda Bbumba.

Other legislators who sit on the committee including Andrew Ajja Baryayanga, Lawrence Bategeka, Thomas Tayebwa and William Nzoghu were also present.

However, on reaching the premises, the gate was locked and the officials could not be allowed in. On peeping into the site, one could see private security personnel as well as those attached to Local Defence Unit (LDU) and labourers attached to the contractor.

A bulldozer and another vehicle were stationed behind the gate in what appeared as a move to block any attempts of anyone entering.

The Minister of Health, Dr Aceng together with the Permanent Secretary, Dr Diana Atwine were stranded outside the precincts of the site as repeated efforts to knock on the gate yielded no success.

The Minister told reporters the incident could have resulted from a letter by the Secretary to the Treasury, Keith Muhakanizi to the Deputy Speaker of Parliament, Jacob Oulabya barring the committee from visiting the site.

He said in the August 2 letter that government handed over the site to Finasi/Roko Construction SPV Limited and as such, “government officials can not move on and off the site at will”. 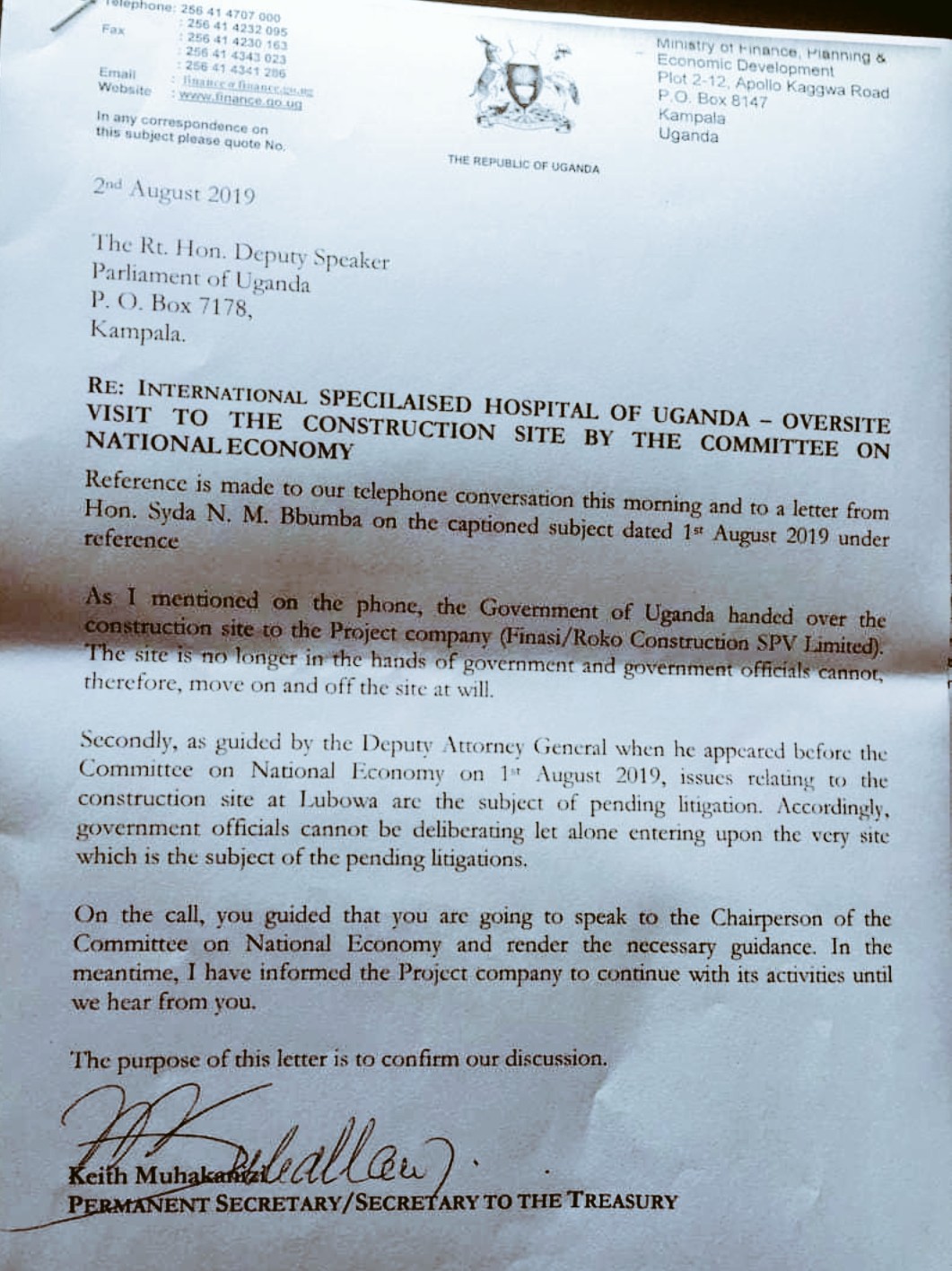 She said she had been invited by the Chairperson of the committee at the site.

While she acknowledged the project is housed under MOH, she said there are complications that need to be addressed.

“Those complications, I already presented them to the entire Parliament and I said there was a problem between the Special Purpose Vehicle team members,” Dr Aceng said.

She could not quantify the progress, stating the contractor hasn’t given a report.

But the Committee Chairperson, Syda Bbumba said she hadn’t received the letter written by Muhakanizi.

“Unfortunately, I haven’t received the letter, therefore what the Minister has given me is confidential information between the PSST and herself because I don’t have a copy yet,” she told reporters.

MP for Ruhinda North, Tayebwa questioned whether the Secretary to the Treasury has the powers to stop a committee of Parliament from carrying out its oversight role.

“Does Keith Muhakanizi have powers to stop Parliament from doing its oversight role? We are doing oversight on him. A committee that has powers to approve loans has no powers to come and do oversight?” Tayebwa queried.

We have been to bigger projects which are even more security averse. We have been to Isimba, we have been to Karuma and to Kabale airport. Projects that are bigger than this. I think this is impunity of the highest order from people who have powers whose source we don’t know.

Tayebwa says Parliament is only interested in assessing progress of a project that is being financed by taxpayers’ money.

He said it is ridiculous that an individual can subdue the entire executive.

MP Andrew Ajja who represents Kabale municipality and was part of the team, said the incident on Tuesday only raises more skepticism on the progress of the project.

“We also want to know which other hospitals Finasi has designed, equipped and maintained. We must also have accountability for the USD 87m that were released,” Baryayanga said.

“We also want to know how far the schedule of taking nurses and Doctors to Bagamore, Italy for studies has gone. We also don’t see Roko on site, instead, we see Chinese. We want to know where they (Finasi) got this contractor. What expertise does he have and how procurement was done”.

William Nzoghu, the MP for Busongola North who was opposed to government financing Finasi to undertake the construction told reporters that denying the team access only confirms what he had observed – that the project was not feasible.

“I said it. I said this project had a fundamental problem and that Parliament must not approve this. And people did not agree with me. I told them these (Finasi) are furniture dealers and they don’t have the expertise”.

On what next, Bbumba said: “We didn’t come here to fight. We came to do oversight in a peaceful manner. But we shall fight with our voices, pens and papers”.

At the end of last month, the Ministry of Health threatened to invoke contractual penalties against Finansi/Roko Special Purpose Vehicle (SPV), the contractor in charge of construction of the International Specialised Hospital in Lubowa.

Minister Aceng said this in Parliament while presenting a statement on the progress of the construction of the hospital which is supposed to last 24 months. The issuance of the commencement order which was handed over to the contractor on June 10, 2019.

The Minister’s concerns follow a delay in the construction of the hospital, caused by the battle between the two contract partners – Finansi and Roko Construction Company.

She said that despite the government having honored its contractual obligations, there exists a legal dispute filed in the High Court (Miscellaneous Application No. 371 of 2019) between the Shareholders of the contractor, M/s Finasi Ltd and M/s Roko Construction Ltd.

The dispute emanates from the disagreement between the parties regarding the proposed admission of a Chinese sub-contractor PowerChina Guizhou Engineering Co. Ltd to conduct civil works by the Contractor Finasi/Roko SPV Ltd which has been deemed oppressive by Roko. 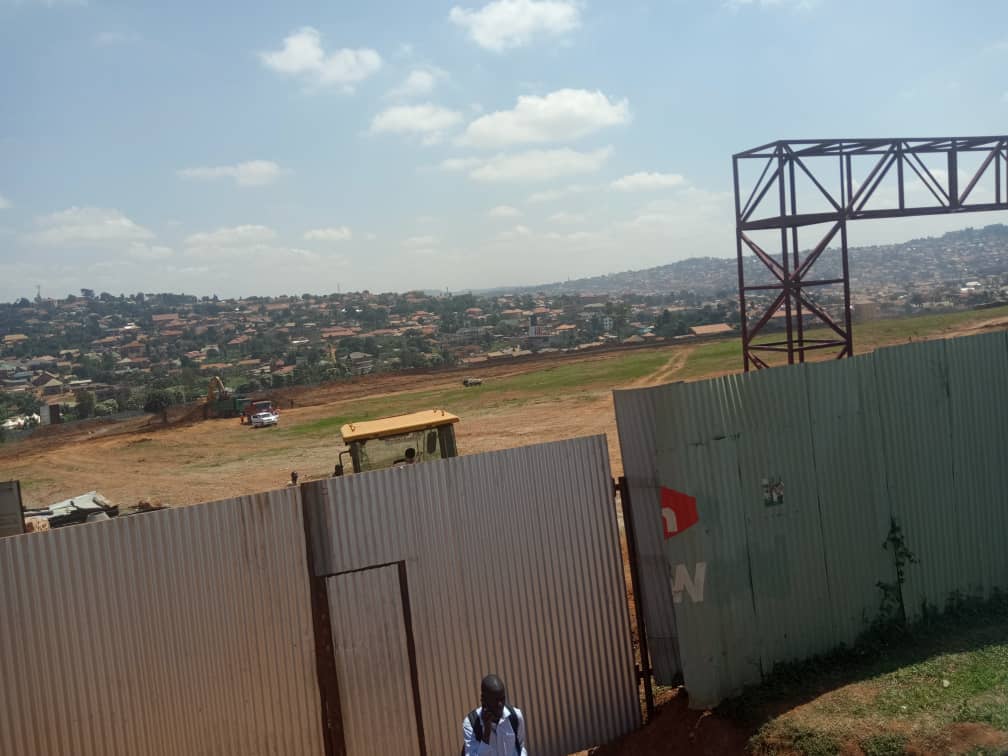 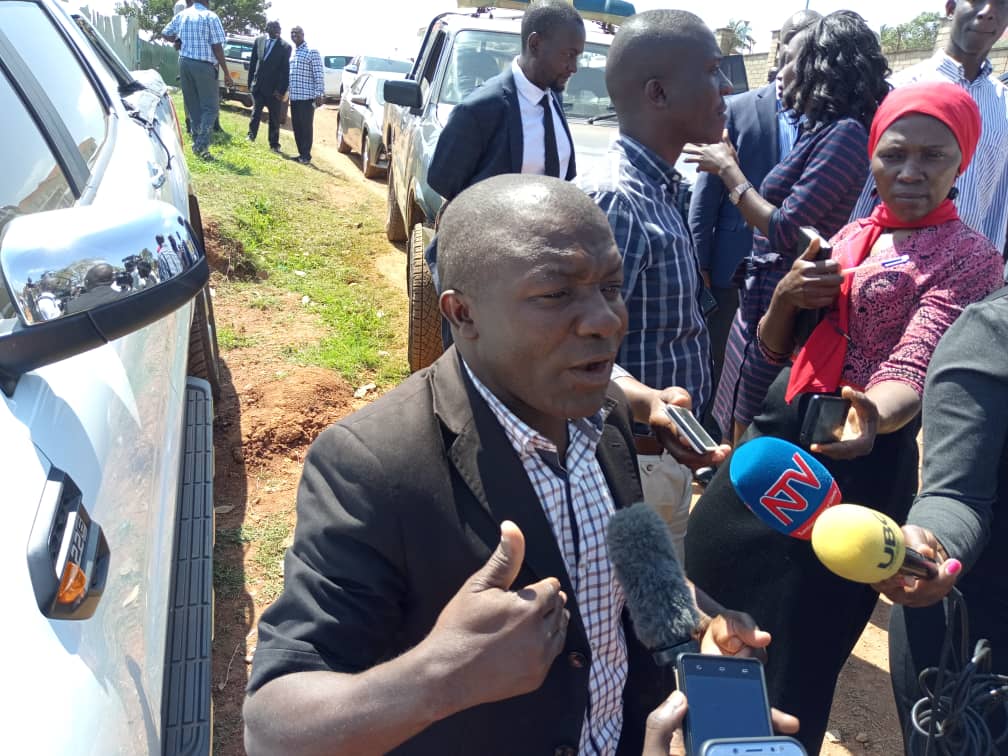 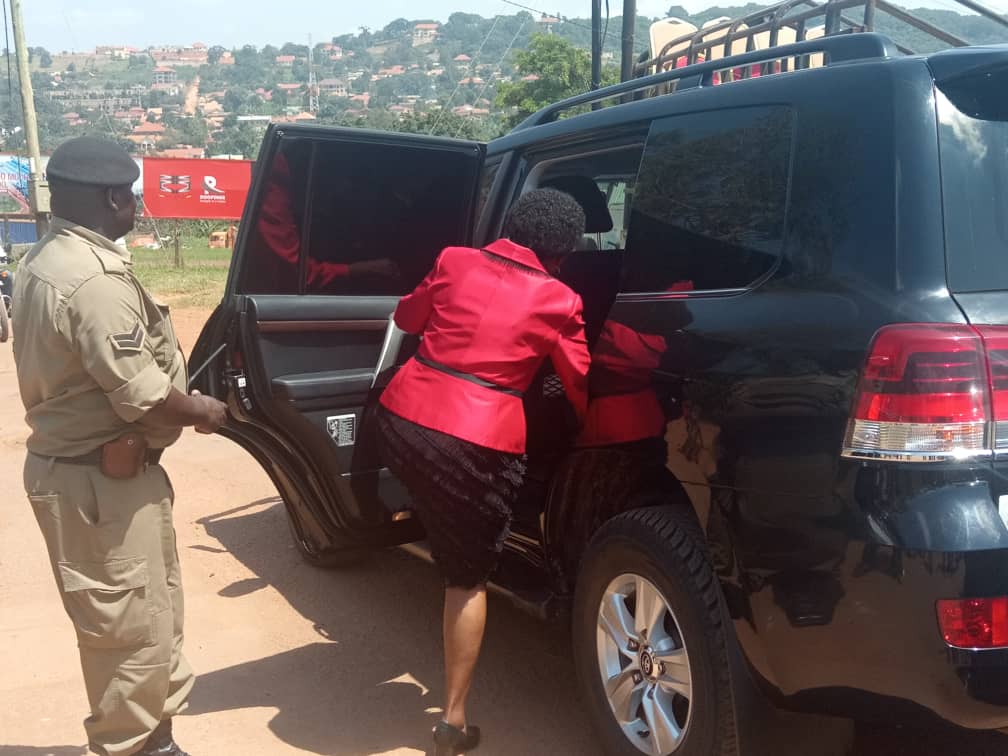 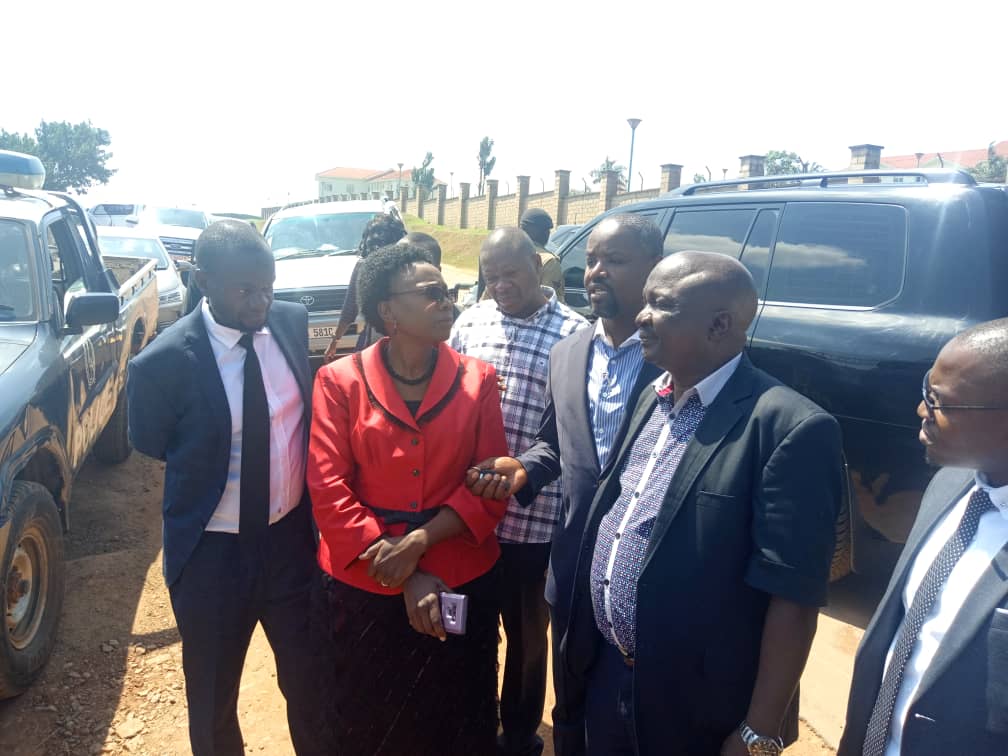 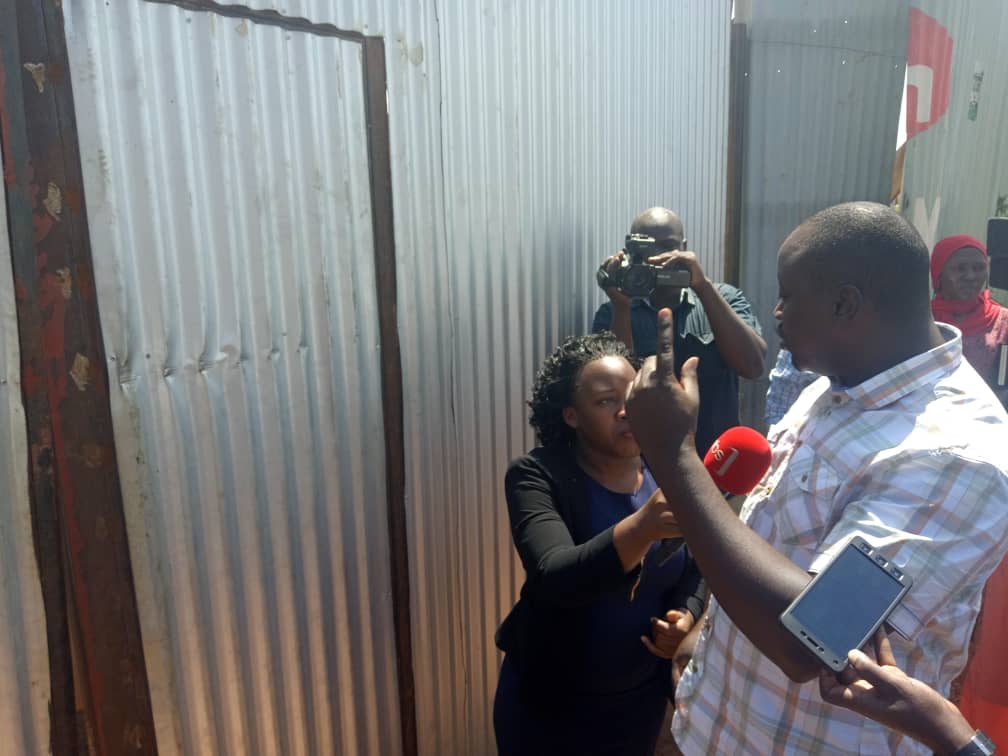 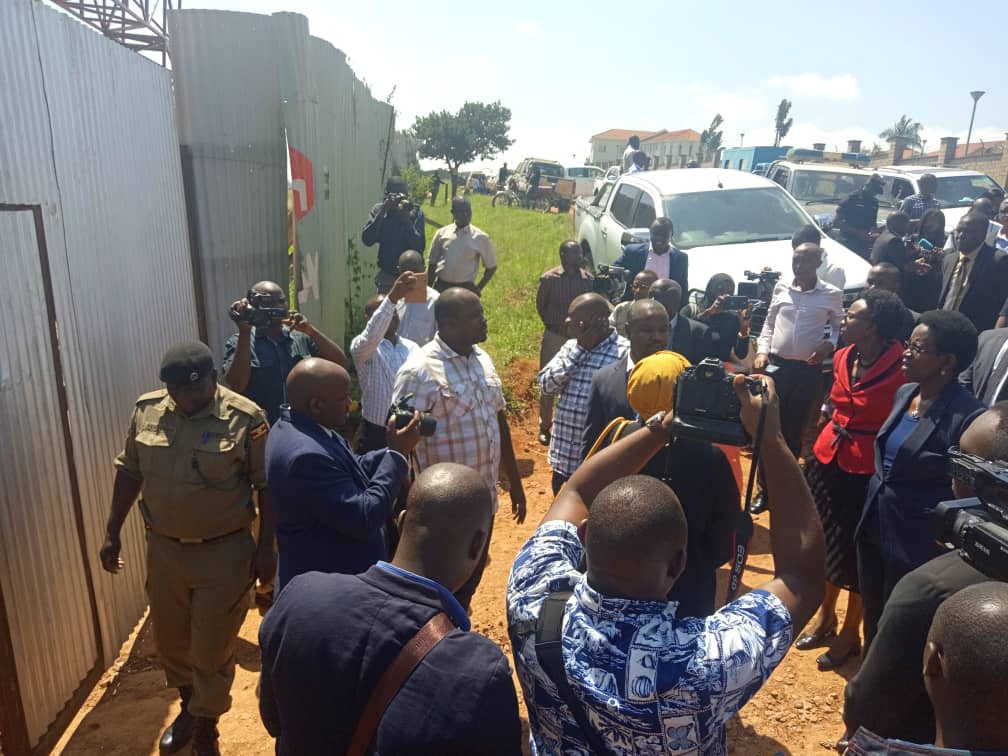 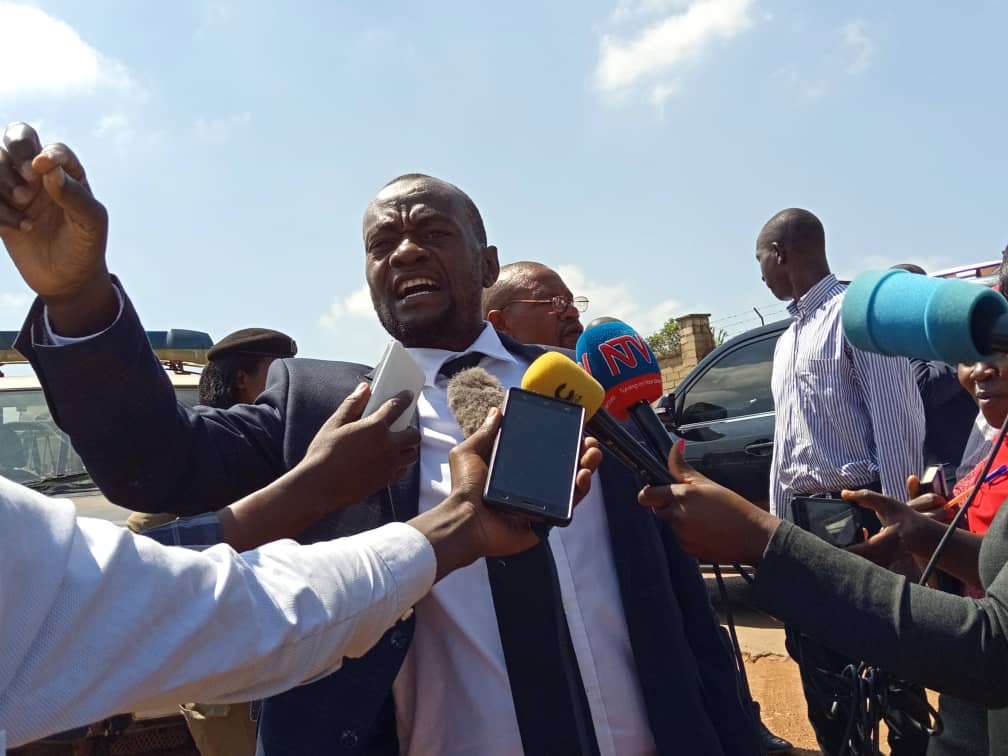 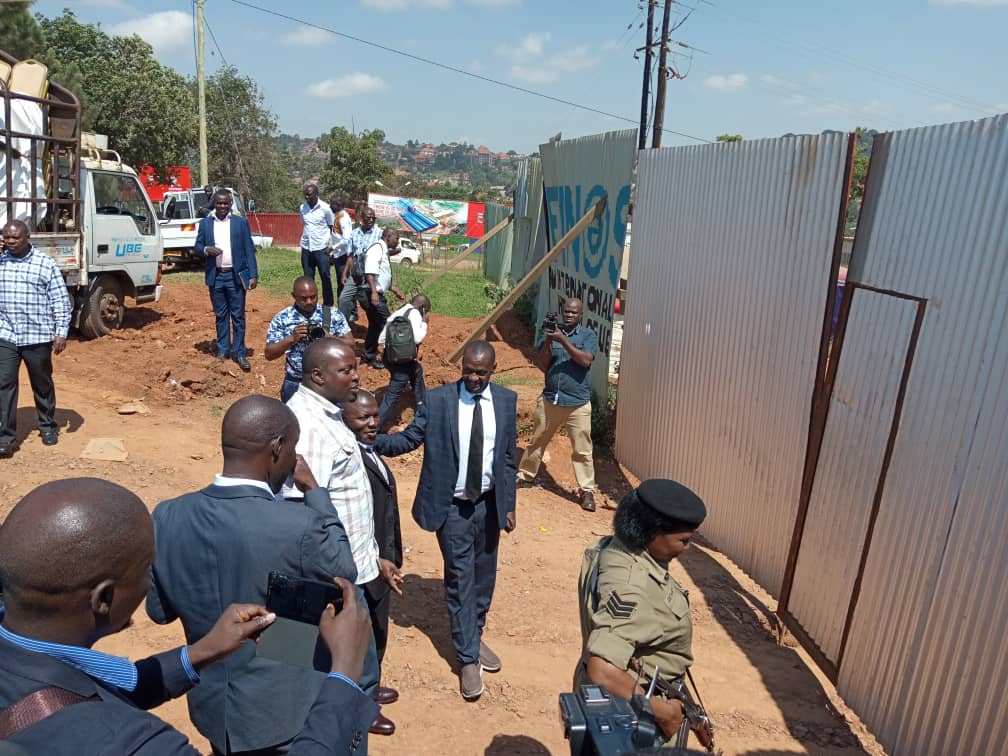 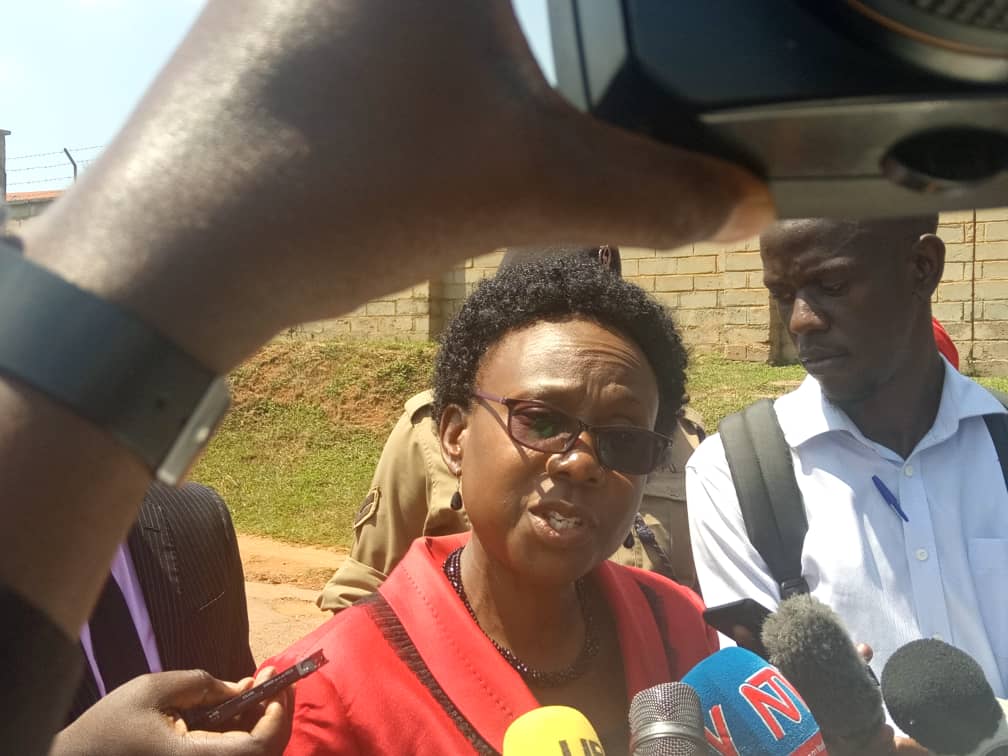 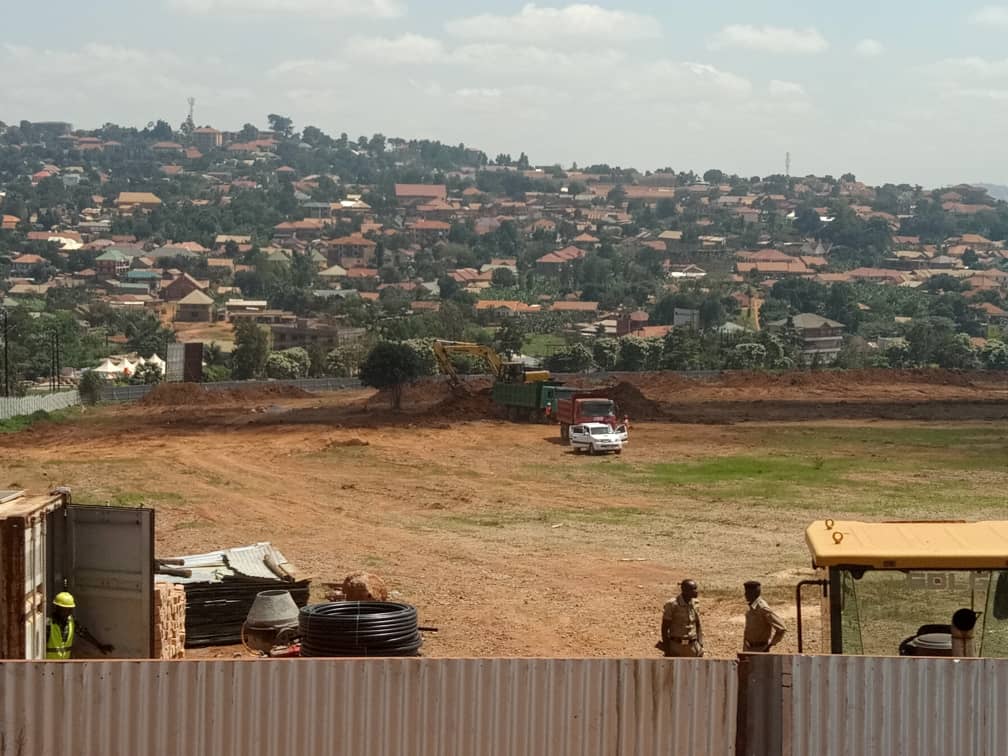 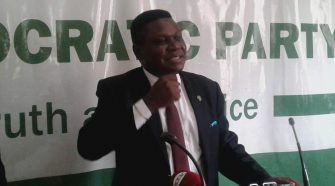