According to WHO, a hundred people have already died of Ebola, while 149 cases of the disease have been reported, with 118 confirmed and 31 probable.

The mayor of Beni Nyonyi Masumbuko Mwanakawa said Ebola prevention activities have been suspended in DR Congo city of Beni after a deadly rebel attack in which 25 were killed by ADF on Saturday night. The Ebola outbreak is mainly in the North Kivu province of the country.

According to Peter Salama, WHO’s deputy director-general for emergency preparedness and response, the teams on the ground were “unable to move because of security concerns following violence by armed rebel groups over the weekend.

The attack took place at 18:30 pm till past midnight, saying many people had been displaced by the fighting.

On Sunday, the army said it was still pursuing the enemy.

More than 100 militias operate in North Kivu and Ituri Provinces.

The ADF was also accused of killing 15 Tanzanian peacekeepers in the Beni region in December 2017.

Eastern DR Congo is plagued by dozens of armed militias that attack locals and exploit minerals.

DR Congo, Africa’s biggest copper producer and the world’s largest source of cobalt, is preparing to hold presidential elections in December this year. 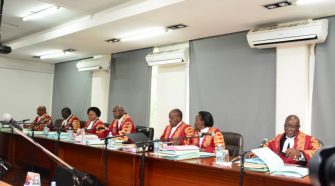