GOMA – Moïse Katumbi, a leading opposition leader in the Democratic Republic of Congo, is being blocked by authorities from entering the country to register as a candidate and participate in the upcoming presidential elections scheduled for December 23.

Presidential candidates in the upcoming elections are required to register with the electoral commission before August 8.

Katumbi, 53, had on Friday planned to travel home by road through Zambia after authorities in Kinshasa denied him permission to fly from South Africa to Lubumbashi, a province of Katanga.

But at the Zambia border with DRC, authorities were trying to block Katumbi’s convoy from crossing into the country.

“After blocking us to fly to Lubumbashi, they are now blocking the road,” Katumbi tweeted from Zambia’s side of the border with DRC.

“But we shall fight on,” Katumbi said.

Previous opinion polls show Katumbi ahead of President Kabila, who has refused to step down since 2016 when his term in office ended.

Katumbi was forced into exile in May 2016 when prosecutors accused him of hiring foreign mercenaries and he was sentenced to three years in prison for real estate fraud. Katumbi has said all accusations leveled against him are politically motivated.

Katumbi, a former Kabila ally, has been doing well compared to other candidates in recent nationwide polls, but his supporters’ worry his participation in the election may be blocked by the authorities.

Already convicted for illegally selling a property, Katumbi is the subject of investigations into allegations that he hired mercenaries and held dual nationality while an elected official.

Kabila, 47, has been at the helm since 2001, following the assassination of his father Desire Laurent Kabila. President Kabila has refused to say whether he will seek a new term. 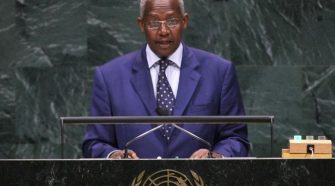