GOMA – Rebels in eastern Democratic Republic of Congo (DR Congo) attacked an Ebola treatment centre in Butembo, which is the epicentre of the current outbreak of the deadly disease, killing a policeman guarding the centre, the mayor of Butembo said on Sunday.

“The army responded quickly and repelled the attackers. The situation is under control now,” Kanyamanda said.

The Ebola treatment centre attacked on Saturday night is the same centre torched by unknown assailants last week, an attack that prompted Medecins Sans Frontieres (Doctors Without Borders) to suspend Ebola response activities in the area.

Doctors Without Borders warn of deepening mistrust and suspicion in the eastern DR Congo that is hampering efforts to bring the Ebola epidemic under control.

The outbreak, which started last year, has killed more than 500 people in North Kivu and Ituri provinces.

“The use of coercion adds fuel to this, using police to force people into complying with health measures is not only unethical, it is totally counterproductive,” Doctors without borders said.

“The communities are not the enemy. Ebola is a common enemy.”

The current Ebola outbreak, first declared last August, is the second deadliest of the haemorrhagic fever since it was discovered in DR Congo in 1976.

The threat of rebel attacks remains high in eastern DR Congo. Most of the attacks in recent years have been attributed to the Allied Democratic Front, an Islamist group of Ugandans that’s been active in DR Congo for more than two decades. 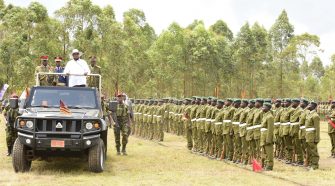