Government has gazetted the opposition’s constitution amendment bill 2019 which seeks to make a number of reforms in the constitution of Uganda to among others ensure free and fair elections.

According to the gazette publication, the bill was gazetted on Dec 13, 2019 and it is awaiting to be printed.

Three months ago, the Shadow Attorney General, Wilfred Niwagaba was granted leave to introduce the bill and embarked on a process of acquiring a certificate of financial implication from the Ministry of Finance.

Despite making all efforts, Niwagaba failed to secure the desired Certificate which prompted the Deputy Speaker of Parliament, Jacob Oulanyah who was presiding over the House to order government to have the bill gazetted so as to enable Parliament proceed to process the bill for an Act of Parliament.

Addressing a news conference at Parliament, Niwagaba said that if printed, they hope the Bill will be presented for first reading on Thursday this week.

He also added that they are hopeful that even the NRM MPs will support their amendments since they seek to benefit all Ugandans.

“We are aware the President will try to give them money as he has always done on controversial matters but our plea to them is that let’s eat the money because it is tax payers’ money but support the people’s position on this bill that has fundamental reforms in all areas,” Niwagaba said.

The object of the Bill is to amend the Constitution of the Republic of Uganda in accordance with article 259 and 262 of the Constitution to among others increase the numbers of members of the Electoral Commission from seven to nine.

It seeks to prohibit the appointment of Ministers from among members of Parliament; to provide for the office of the Speaker’s Panel. 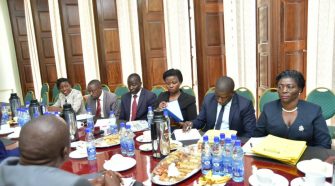 “The Stakes are High” -Prosecutors Want Strike Handled as Emergency