There is panic among the organisers of the much anticipated Wizkid’s show that is slated to happen December 7. The on-off Kampala concert of Nigerian singer WizKid, seems to be on again with the singer determined to make it up to Ugandans for a failed 2016 concert. To our Shock, Local artist Pallaso has stubbornly placed his annual year concert on the same date.

Sources within the camp of Pallaso have exclusively revealed to us that, Wizkid sent his confidants to talk down Pallaso about change of mind and date for his show. We have also learnt that the singer was adamant and asked Wizkid not to panic but to come and show his worth. Pallaso seems ready for the battle.

Last year, Ugandans were angry when Wizkid cancelled his show at the last minute. Music lovers almost collapsed when upon learning of the sudden news. They had already bought off the tickets.

Wizkid later issued a statement saying, he would give Ugandans two free shows come this year. Still some fans think it was a lie and find it hard to believe anything from the Nigerian Singer.

Pallaso is confident his show will be a success considering that Ugandans take Wizkid for a joke.

We shall keep you posted of new developments about the shows. 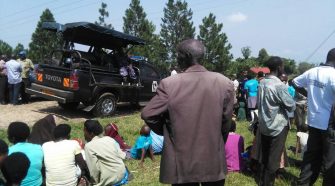