Controversy continues to deepen at the Uganda Investment Authority (UIA) as the Chairperson Board of Director, Dr Emely Kugonza has in his latest move ordered staff to boycott a meeting summoned by the Executive Director who was days ago interdicted.

The UIA Executive Director, Jolly Kaguhangire was Tuesday forced out of office following a meeting by the UIA Board which accused her of corruption, abuse of office, insubordination, lying to the Board among other allegations.

The Board resolved to interdict her for 3 months so that a probe into the allegations could take place.

Read More: UIA E.D, Jolly Kaguhangire Forced Out of Office Over Corruption and Abuse of Office

But in retaliation, Kaguhangire has since refused to comply with the Board decision accusing Dr Kugonza and the Board of flouting of procedure. She said that the Board meeting which resolved to interdict her lacked quorum and thus their decisions do not hold.

Kaguhangire further stated in her letter addressed to Mr Kugonza that one of the Board members who participated in the meeting has personal conflict with her which she says was an act of prejudice towards her.

Hours after receiving the Wednesday letter, the Board Chairperson wrote an email to all the staff directing them to snub a meeting arranged by Kaguhangire today. The mail is also copied to Basil Ajel who was appointed by the Board to serve in acting capacity as the Executive Director.

“It has come to the Board’s knowledge that the interdicted Executive Director in the names of Jolly Kaguhangire has called for a meeting tomorrow,” Dr Kugonza wrote in an email late on Wednesday night.

“This is to direct you not to attend the said meeting as the interdicted Executive Director has no mandate to call for such a meeting,” Kugonza added.

He asked staff to continue with their normal activities and disregard any communication of instruction from the interdicted Executive Director.

UIA Stand-off: Minister Kasaija Sucked in Amid Kaguhangire’s Refusal to Step Down

UIA E.D Jolly Kaguhangire Forced Out of Office Over Corruption and Abuse of Office 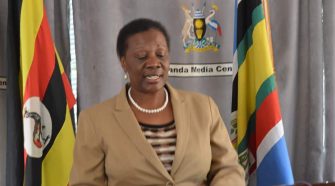