Parliament has summoned the Minister of Energy and Mineral Development to explain on the country’s fuel reserves and supplies.

This came after the Minister of Finance, Planning and Economic Development, Matia Kasaija informed Parliament that the country is currently experiencing fuel shortage in the country.

Kasaija informed MPs that the current dilemma is attributed to the reduction in supplies the country receives from the Middle East after production went down due to Corona Virus which he says in turn has affected the country’s reserves as they are running low.

“As such, our share of fuel we pick from Mombasa has gone down and because of the problem, our buffer stocks are running low but we are doing everything possible to ensure that the issue is sorted out,” Kasaija said.

At this time, Members of Parliament were debating about the hiked prices of essential commodities and fuel in the country since the announcement measures to combat corona virus.

President Museveni has however this evening warned to withdraw license of any businessmen who is found hiking prices of commodities especially food products since these are locally produced. 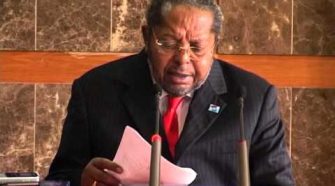