Brian Bagyenda, 29, is accused of killing his girlfriend, Enid Twijukye.

The accused confessed to the murder on December 14, last year and asked for a plea bargain in the High Court, seeking a lenient sentence, which prompted Justice Anthony Ojok Ayu to adjourn the case to December 17 for both parties to inform court on the outcome of their discussions on the gravity of the sentence.

But on December 17, the negotiations failed when Joseph Kyomuhendo, a Senior State Attorney, argued that there was no way the Director of Public Prosecutions (DPP) would proceed with what Bagyenda wanted, yet his lawyer Nsubuga Mubiru claimed that his client was insane, having escaped from Butabika Hospital where he was a patient prior to committing the alleged offence.

Kyomuhendo insisted that Bagyenda and his co-accused were examined on Police Form 24, and found to be of sound mind and able to stand trial.

Prosecution says: “Bagyenda confessed to killing the deceased (Twijukye). He stated that they had a misunderstanding following suspicion that she was involved with another man. He had her strangled in his bedroom at home (in Luzira) with the help of his co-accused.”

Bagyenda is accused alongside Innocent Bainomugisha and Vincent Rwahwire who both have since changed their mind on plea bargaining and await trial.

The prosecution states that the deceased left home on January 3, 2017, but did not return. Her sister Evas later got concerned and contacted different family members to establish her whereabouts but to no avail.

“Investigations were carried out to establish the last person to be seen with the deceased and her old phone at home showed frequent calls to a one Bagyenda who was known as her boyfriend,” the prosecution’s evidence reads in parts.

“Two weeks earlier during, the Christmas season, the deceased had travelled to her village in Kazo in Bagyenda’s vehicle an Ipsum blue in colour,” adds prosecution.

The evidence further indicates that the deceased’s property including, a brown handbag, and mobile phone among others, a roll of cello tape and three pillow cases were later found to have been used to tie her hands and legs at the time she was strangled.

The items were recovered at a hotel in Mutungo (Hotel Voyager) where the two (Bagyenda and Twijukye) had checked in Room 6 under an alias ‘Mujuzi John’. 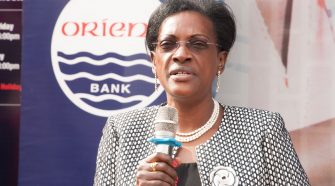