Brian Bagyenda, son to Internal Security Organization (ISO) Director Kaka Bagyenda who has been on trial for the alleged murder of his girlfriend has Monday been convicted of the charge – murder.

Brian is accused of killing his 22-year-old girlfriend Enid Twijukye in January 2016 .

In January, prosecution told court that Bagyenda fully participated in the murder and knew what he was doing when he called on his two accomplices to tie up the deceased with a pillowcase which led to her death.

“Tying the deceased with a pillowcase, the accused very well knew that this would cut off oxygen supply and eventually cause death. A1 (accused one) Bagyenda is a well-educated and a qualified pharmacist who knew that cutting off someone’s oxygen supply causes death,” Keko Joan one of the prosecutors said.

Court relied on 16 prosecution witnesses who told the court that a 22year old Twijukye was suffocated to death with pillows.

The judge also ruled that there is no evidence convincing him that by the time Bagyenda killed his girlfriend he was mentally unstable.

Last month, the defence lawyer, Allan Sserulika told court that Brian was suffering a disease of the mind at the time.

He said Brian’s brother, Arnold, who was among the defence witnesses informed court that he had spoken to the police about his state of mind while he was in their custody.

But prosecution argued to the contrary, saying a mentally insane person could not have called his accomplices to help him dump the body in a swamp, hide the deceased’s belongings, and then later go to hide in a hotel where he checked in using a fake name.

The alleged murder was committed on January 4th, 2017, along Njobe road in Luzira, the home of Bagyenda Brian, before the deceased’s body was dumped in Namanve forest along Jinja road. 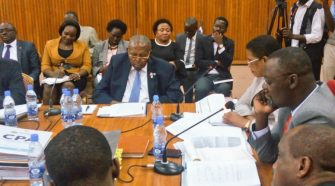