Sam Owor Otada on Wednesday wrote to the Electoral Commission withdrawing from the race slated for Thursday August 10.

Notice is hereby given by me, Otada Sam Amooti that with effect from today, the 9th day of August 2017, I do hereby withdraw my candidature for the elective office of Member of Parliament, Kibanda North County Constituency, Kiryandongo District for the by election slated for 10th August 2017, Otada’s letter reads.

The letter bears signatures of two voters, Otim Patrick and Kimuli Catherine who endorsed the move.

We registered voters of Kibanda north county constituency, Kiryandongo district whose names are hereunto appended, do hereby sign in witness to the withdrawal of candidature by candidate Otada Sam Amooti Owor.

Although Otada does not state why he decided to quit the race, High Court judge Justice Margaret Oumo Oguli earlier declined to block Kibanda North constituency bye- elections as Sam Otada had applied.

In his application, Otada had asked Justice Margret Oguli-Oumo to block the coming bye- elections on grounds that the NRM flag- bearer Taban Amin’s election was held in contempt of Masindi High court order.

Consequently, the Electoral commission which Otada sued as a respondent was given green-light to go on with this bye-elections

The Kibanda North MP seat fell vacant on 30th May this year when the Court of Appeal nullified the election of Taban Amin’s grandson to former president Idi Amin on grounds that he was nominated using fake names. 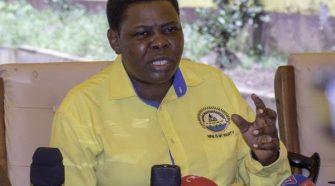