Justice Yasin Nyanzi extended the order this morning pending the hearing of an application by the affected residents challenging their eviction.

The extended order was issued on Friday by the Deputy Registrar of the High Court Land Division when the residents complained that they would suffer irreparable damage unless NEMA is blocked from evicting them.

The order was scheduled to expire today since the matter had been fixed for hearing before Justice Nyanzi.

However, the main case couldn’t be heard because the judge has advised the applicants to amend their suit and reduce the number of complainants so that a few can represent the others.

The applicant’s lawyer, Achilies Lubega, says the move is aimed at saving time to allow court to dispose of the matter.

The applicants are challenging NEMA’s Environmental restoration order of June 8 2020, which gave them 21 days to demolish their houses and vacate the land or else face forceful eviction.

The applicants who stormed court in dozens argue that they have been living on the contested land for over thirty years even before the NEMA Act was enacted in 1998.

Jeff Gidaguyi, one of the lead applicants contends that he has been living in the area since 2010 when he secured his plot from Bosco Ibanda.

Gidaguyi says that together with the other applicants they have developed the area by constructing residential and commercial premises, places of worship, health facilities and education Institutions from which they derive sustenance, spiritual wellbeing and treatment.

Their LC I Chairperson, Yiga Gonzaga says they were enjoying a peaceful stay on the suit land until when NEMA served them with an Environmental restoration order giving them 21 days to demolish their houses and leave.

Gonzaga says they now want court to declare that they are not occupying any land under the management of NEMA as well as compensation from government if it plans to set up a project on the land. 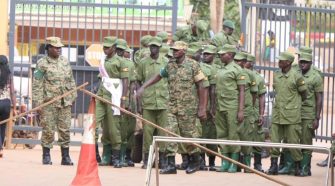