Hillary Innocent Sseguya a Ugandan citizen pursuing a Master’s degree in International Relations at the Harvard University in the U.S., petitioned court on 26 August 2019 for being blocked by President Yoweri Museveni on Twitter.

In the suit filed before the High Court Civil Division, Seguya said he had given powers to his relative Hassan Male Mabirizi who is an advocate to institute the case on his behalf.

Seguya stated that before being blocked, he used the same Twitter handles to communicate his views, dismays and suggestions to the respective officers thus the decision of the government officials to block him is illegal, improper and irrational since the said Twitter accounts are used in public domain to communicate and receive feedback from citizens.

Hillary who uses part of his time on Twitter to post in support of Bobi Wine and spite President Museveni, filed as evidence, twenty-seven tweets in which Museveni tweeted and communicated the official government positions about the work done by his office.

The Harvard University student asked High Court to declare that the actions of blocking him on twitter were unlawful and illegal and that he should be immediately unblocked.

The case came at a time of a similar case in which a court ruled that U.S. President Donald Trump violated the U.S. Constitution by blocking people whose views he disliked on Twitter.

Now, the civil division of the High Court in Kampala has ruled that President Museveni and the other officials were right to block Hillary.

On Wednesday Justice Andrew Bashaija ruled that the US precedent in which President Donald Trump was ordered to unblock his twitter followers that Sseguya based on during his case is not applicable in Uganda because the law regimes are quite different in the two countries.

“Records Administration advised the White House that the Presidential tweets are official records for preservation under the said Act. Several other case law authorities are quoted and principles therein relied upon. Such legislations and case law principles espoused, do not obtain in our jurisdiction, which is founded on common law jurisdiction, unlike the USA,” Justice Bashaija ruled.

According to the judge the twitter handles of President Museveni, AIGP Asan Kasingye and Ofwono Opondo are personal and there exists alternative handles that are used to exclusively communicate official government positions and therefore the three government officials have a right to use their personal handles in a manner they deem fit.

Justice Bashaija named @stateHouseUg; @ugandamediacent; and @policeUg as the official twitter handles for State House, government of Uganda and Uganda Police Force and these are exclusively used to communicate official positions.

“Being private twitter handles, therefore, the respective persons have the latitude to choose whom to allow or block on those handles” the judge ruled.

The judge said there was no evidence that any of Hillary’s rights were violated by being blocked on Twitter by President Museveni and the two government officials. The application was, therefore, dismissed and Hillary ordered to pay costs. 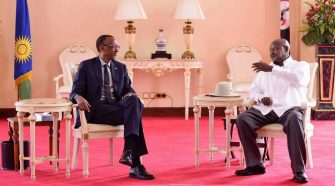