The Constitutional Court has upheld the removal of the Presidential age limit from the constitution by Parliament last year.

On Thursday, the 5 Justices of the Constitutional Court sitting at the High Court in Mbale delivered their judgment on the contentious constitutional amendments which were challenged in a consolidated petition.

In his ruling, Deputy Chief Justice Alphonse Owiny-Dollo said that by design, the Article in question was not in its passing in 1995 gazetted as a fundamental feature of the Constitution requiring entrenchment.

“The framers of the 1995 constitution did not consider the age limit for standing for president or district chairperson as fundamental so for Parliament to amend these only needed a 2/3s majority,” the Deputy Chief Justice said.

“Since Parliament exercised the power given to them in amending the constitution, I find no fault in how this was done. Therefore, it is my conclusion that the amendments were done with full compliance to the rules of procedure.”

On his part, Justice Remmy Kasule whose submissions came second last stated that those who framed the 95′ Constitution left it to members of Parliament to amend presidential age limits with no need for a referendum.

The other four Justices validated the scrapping of the age cap for eligibility to run for President and defended the legal process in which this was done, except Justice Kenneth Kakuru.

The issue on which the entire bench was in agreement was the extension of the term of legislators and local government elected leaders which they all say was done unlawfully.

“MPs have no power of their own. The power they have belongs to the people, it is delegated power. The suggestion by the Attorney General that MPs can amend anything is fiction. It must be rejected and I therefore reject it,” Justice Kakuru said.

Majority of the Justices also concurred that the reintroduction of the Presidential term limits which was part of the set of amendments required a referendum and therefore its unilateral passing by Parliament was illegal. They also punched holes in the process of amending the sections of the Constitution which fell short of public participation.

In his final ruling, the Deputy Chief Justice noted that the constitution is liable to amendment but the reasons for amendment must be compelling.

“As a people, we are entitled to be apprehensive of the future and therefore need a strong constitution. The constitution is not for the current generation but this generation needs to bequeath a stable nation to future generations,” Dollo said. 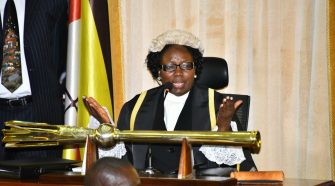