Buganda Kingdom has closed its kingdom offices and will suspend half of its staff from the work as part of measures to reduce human interaction in a bid to prevent the spread of coronavirus.

This was revealed by the Katikkiro of Buganda Kingdom, Charles Peter Mayiga at a press briefing in Mengo on Thursday.

“We have decided to close kingdom offices henceforth until April 14 depending on how long the government will hold the ban on public transport,” the Katikkiro said.

On Wednesday, President Yoweri Museveni banned public means of transport which majority of Ugandans especially those in Kampala rely on move from their homes to workplaces.

“We are going to cut staff by 50 percent. The rest of the workers will return after 32 days. Should the government extend the 32-day ban, 50 percent of our staff will stay home and wait for further instructions,” Mayiga added.

He said that the kingdom has been affected by the pandemic, citing a number of events which have since been cancelled following the Presidential directive which suspended public gatherings.

These events were critical for the kingdom, he said, as they were channels for passing on information to the public.

Mayiga however said some of the companies and organizations owned by the kingdom such as the media entities will continue to run.

“I encourage these companies to work out business continuity plans”.

He said COVID-19 is non-discriminatory and that fighting it will require that all Ugandans work together.

He particularly urged the public to seek the right information from credible sources such as Ministry of Health as well as World Health Organization media.

“I encourage people to embrace the internet and to make use of social media. The downside however is that people are posting fake information which others take to be gospel truth. Such information should be disregarded”.

The Katikkiro further advised the public go desist from sounding alarmist, saying this could push some people to act out of desperation with negative results including suicide.

“Let’s retain hope. There are people who have recovered. In any case, those that have died are fewer than those who have survived,” the Katikkiro said.

He also cautioned political actors who are politicizing the circumstances saying that getting rid of the virus is what is the priority at the moment. 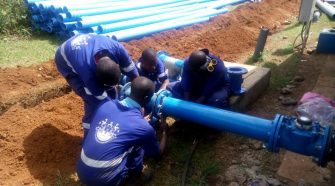