First of all, I would like to thank you and your cabinet- for the courageous leadership thus far- especially the decisions announced on March 18th 2020 which among others include the decision to temporarily disperse areas of population concentrations such as schools; religious, political and social gatherings, as well as travel restrictions on certain high risk countries.

I do agree with you, that much as this may hurt the economy temporarily, it is necessary to shield the country from much bigger harm- should, God forbid Corona land in the country and, in your own words: “find plenty of dry grass piled up and ready for flaming.”

In the same breath, I would like to thank all people, at the frontline- healthcare workers, the armed forces, immigration and aviation officials, and all other government and private sector personnel who are putting themselves in harm’s way to ensure that by the time of writing this article, Uganda is still one of the few countries in the world, without a single confirmed case of Corona Virus Disease (COVID-19).

In the same spirit I applaud all the efforts being put in place by all stakeholders in the private sector and civil society, such as the measures announced by some telecom operators and bankers, to reduce transaction charges on digital banking so as to encourage the public to migrate to using more digital money instead of cash, which has been identified as a potential medium of transmission for COVID-19.

Fighting together as a country, under your leadership, we do believe, COVID-19 shall be defeated like we have defeated Ebola and other disease outbreaks.

The economic impact of COVID-19 Mr. President, even though Uganda is still safe from COVID-19, given the nature of the global economy, the economic effects have already started landing. We now know, from the March 19th 2020 Finance Minister’s statement to parliament that due to depressed global demand and travel restrictions associated with COVID-19, there will be a severe reduction in exports and tourism receipts. We also know that foreign workers remittances and Foreign Direct Investments (FDIs) will “decline significantly”.

This, combined with an estimated 50% reduction in loan disbursements in the last five months of FY2019/20 will not only reduce money inflows, but will also put pressure on the shilling, eventually causing foreign exchange reserves to decline from 4.2 future months of imports to about 3.5 months.

Government has also warned that banking industry non-performing loans could worsen from 4.7% to 5.9% and that the worst affected sectors will be trade, tourism, transportation and construction.

Overall, government growth prospects for FY2019/20 have as a result been reduced from 6.0 percent to anywhere between 4.6% to 5.7% and in a worst case scenario, this could see up to 2.6 million people relapse into poverty.

Government’s frankness on the challenges ahead and the attempts to tackle the challenges head on, such as the planned intentions to secure a USD190 million (SHS725 billion) concessional facility from the World Bank in budgetary support for FY2019/20 and FY202/21 is very welcome.

More importantly I applaud and at the same time anxiously await to hear the fiscal and monetary policy adjustments that the finance minister said are being worked on by Bank of Uganda, in conjunction with the International Monetary Fund.

I agree with you Mr. President Museveni when you said that the reduction in imports expenditure– by up to 44% according to Ministry of Finance, presents an opportunity of import substitution and in your words, “turning misfortune into an opportunity.”

In this regard, the gesture, announced by the Minister of Finance to meet the private sector and financial institutions to “enhance implementation of the import substitution and export promotion strategy and to discuss Government’s short, medium- and long-term policy responses aimed at dealing with the negative impacts of the COVID-19 on our economy and future economic shocks” is a very welcome move.

My imperfect proposals to stimulate the economy and build more local resilience
As we urgently and anxiously await these meetings and measures, it is our prayer that hopefully this time, there is more action than talk, because every minute counts.

On my behalf and borrowing from my experience in the private sector for over four decades especially in manufacturing, financial services, construction and tourism sectors, ahead of these serious conversations, here are some initiatives that government can look into:

• Immediate settlement by government of the huge domestic arrears: According to the Auditor General’s report, as at 30th June 2019, government domestic arrears stood at SHS3.3 trillion- having grown by 29.9% from SHS2.6 trillion from June 2018. We do understand that for FY2018/19 only SHS380.5 billion was budgeted to pay some of these debts- just about 11.5% of the total debt!

At this rate, it simply means that domestic arrears will never be resolved because the arrears grew by SHS700 billion, nearly twice the amount of money being provided to settle them. Settlement of this government debt, will allow most private sector business to get back on their feet, pay their debts and loans, thus, not only raising tax collections but more importantly stimulating domestic demand, to aubstitute depressed international demand.

Repayment of loans will reduce banking industry non-performing loans, which will subsequently have a knock-on effect on interest rates. Moving forward there should be a consideration by government to put a time-ceiling on domestic arrears and hold accounting officers responsible for failure to settle government obligations especially where money is available.

• Improved government budget efficiency: Mr. President, you probably already know that according the Auditor General, government failed to spend SHS548 billion in FY2018/19. Some of this money was due to private sector businesses and while these businesses struggle, no action has taken against the responsible public officials for this recurring financial indiscipline. It is our prayer that as the various measures being considered to rescue the economy- you do pay special attention to this, to make sure that the intended help gets to people who need it very fast.

• Pay more attention to local content: Your Excellency there has been a lot of talk about local content and BUBU especially in government procurements- but it appears this is more of talk than real action. For starters, there is no real figures to measure how much of government expenditures is going to local companies. In the absence of real figures, it becomes difficult to track this critical initiative of your government. This is the time to seriously focus on how much, Ugandan businesses are benefiting from government expenditure.

• Lower Interest rates for businesses, especially in trade, manufacturing, tourism, transportation and construction: The finance Minister has warned that non-performing loans in these sectors, that will be worst hit by COVID-19 could rise to as much as 50%. By default banks will immediately cut lending to these sectors and for the few who manage to secure debt, it will be expensively priced. For some sectors like manufacturing and hotels- even at zero business, they still have to continue spending to maintain their facilities in working order.

I would like to bring to your attention that for example, despite the tourism & hospitality sector being one of the key priority sectors for government and the top forex earner, it only accounted for 2% of the USHS364.4 billion loans disbursed by Uganda Development Bank between 2015 and 2018.

If the government, through the Central Bank can consider Central Bank Rate interest cuts to keep the cost of borrowing manageable and in line with our regional neighbors with whom we will be looking to compete in the COMESA export markets, this will be a great inventive to local industry.

A signal from government owned financial institutions such as Uganda Development Bank (100 percent ownership), Pride Microfinance Ltd (100 per cent), Post Bank (100 percent) and Housing Finance Bank (49.18 per cent) as well as appropriate government incentives, could see even other financial institutions consider interest payment grace-periods as well as preferential lending to the above sectors especially.

• Restricting outflow of NSSF investments out of Uganda: Suffice to say is that some critical Ugandan-owned companies especially in the above key sectors unlike their internationally-owned peers are likely to be hit most by this crisis. Some will most likely be hit even harder that banks won’t consider them credit worthy anymore. To avoid a repeat of what has happened in the banking sector where nearly all Ugandan-owned banks were hastily closed at the first signs of trouble, it is important that government considers a relief fund to invest in some strategically important Ugandan-owned companies either through special credit facilities and or equity investments for the willing parties.

For this purpose, in the medium term, government should consider restricting NSSF equity investments into Ugandan-owned or domiciled businesses until Uganda stabilises. Mr. President you may want to for example know that more than 50% of NSSF’s equity investments as at 30th June 2018- were invested in foreign companies. Exposure to regional securities- largely government paper, stood at 40%. Much as some of these companies like East African Breweries (EABL) where NSSF is invested have some operations here, at this critical time, NSSF investments, should benefit Ugandan-based companies more, after all they do contribute 66% of this fund.

• Delay the implementation of Digital Tax Stamps: Mr. President, the manufacturers especially in the beverages sector have presented to you our plight on this issue and the fact that Digital Tax stamps or at least the mode in which it is being implemented, does not make economic sense to Uganda and the manufacturers as well. We have severally and variously made a case that for example the Government of Uganda projects to spend SHS341 (USD101 million) on payments for these stamps to a foreign company in order to collect SHS47.74 billion (USD13 million) only to no avail!

We have also shown Uganda Revenue Authority (URA) that the same company charges other manufacturers elsewhere in the region less for the same services that they are providing here. We do believe this is the time to halt this exorbitant scheme- so we can keep this much needed forex in the country- at this critical time when we need it most, to remain afloat and keep Ugandans employed and able to put food at their tables.

Mr. President, I do not speak for the private sector, but I do believe many of my peers share the same sentiments. We are behind you and we believe with your leadership and the typical Ugandan resilience, we shall overcome.

FOR GOD AND MY COUNTRY!

The writer is a Ugandan businessman, entrepreneur, and industrialist. He is the Executive Chairman for Crown Beverages Ltd and former Chairman, Uganda Manufacturers Association 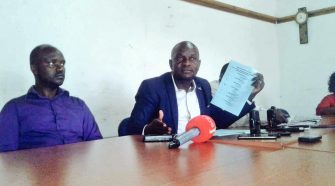