Uganda has banned all public gatherings including suspending school going, entertainments events, church services and weddings with more than 10 people, for a period of one month to reduce the risk of transmitting the Coronavirus.

The strong measures were announced Wednesday by President Yoweri Museveni as he addressed the country on government interventions to slow the spread of COVID-19 which is fast spreading in East Africa.

Despite the country not registering any case of COVID-19, Museveni said big masses of people gathered in groups and in close proximity are push factors for spreading the virus.

Museveni said government has resolved to suspend schools from Primary level to University for a period of 32 days.

There are about 10 million pupils attending Primary, 2 million in pre-primary school, 2 million in Secondary School, 314,000 students in university and tertiary institutions, all together totaling to about 15 million.

“These 15 million people are gathered in 51,000 points in the form of schools and colleges. It is wise that we temporarily remove these points by closing these schools for one month starting Friday midday,” Museveni said during his address at State House Entebbe.

“All these institutions without exception should close so we can deny this virus those concentrations”.

He said the strategy is to distribute these millions of learners across the 8 million homesteads which would on average imply that each homestead houses 2 learners. It is a smart way in the face of the danger posed by the pandemic, he said.

“I have observed the situation in other countries. There is too much stampede and transport is usually the first aspect to be affected. You have seen how airports were crowded with traffic in trying to run away. And this is how people will get infections”.

Government has also prohibited religious gatherings including mass prayers, with immediate effect. The President says prayers will continue in homes and urged religious leaders to use media – TVs and radios.

“When it comes to health, it’s better to be a coward and to be on the side of caution, If there is no danger in one month, that’s no problem. If there was danger, we would have avoided it,” he said, adding, “logically, the faster we run, the better”.

Regarding travel, Uganda has also declared a ban on all Ugandan nationals outbound to and through the countries identified as high risk. These countries include Italy, France, South Korea, China, US, UK, Netherlands, Switzerland, Sweden, Belgium, Germany, Spain, Norway, Austria, Pakistan and San Morino.

Non-Ugandans flying out of Uganda to these select countries will be allowed to travel as long as they don’t intend return to Uganda during the specified time (one month).

“We can’t stop Ugandans coming from abroad even from Category One. There is mandatory quarantine and they will pay the costs for their food. If they are not willing to pay these costs, then they can stay in the countries where they are”.

In the case of non agricultural work places – factories, hotels, large plantations, taxi parks, markets – the President said these will continue to operate but with regulations. The Ministry of Health has been directed to draft Standard Operating Procedures that will regulate these operations. These will include, compulsory hand washing, restricting access for those with symptoms, and installing temperature monitors.

On public transport, the President appealed to the public to desist from using public means of transport since it involves confined spaces.

“Do not travel unless it’s necessary. If you don’t have your own car, stay in your place. Companies that operate these means should be given SOPs”

The public nightlife is also set to suffer restrictions. Museveni said merrymaking – discos, dances, music shows, concerts, cinemas – is henceforth prohibited as it is “very dangerous”. He said drunkards can be reckless and have high chances of spreading the virus. 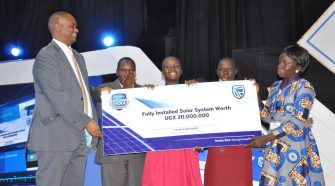