President Yoweri Museveni has assured Ugandans that government in conjunction with the regional leaders is exploring ways of dealing with the continued imported cases of COVID-19 as a result of truck drivers.

On Thursday, the Ministry of Health confirmed 11 new cases out of 1020 samples tested who all happen to be truck drivers from neighbouring countries.

This brings the total of confirmed cases in the country to 74 and the total recoveries at 46 and 28 active cases.

While flagging off the first fleet of donated vehicles to the Ministry of Health in Kololo, the President noted that truck drivers are still posing a challenge to the fight against COVID-19 but the authorities are exploring all possible ways of handling it.

Museveni revealed that the Ministry of Health in currently holding a meeting with other Health Ministers in the region with the aim of coming up with a lasting solution to the challenge of truck drivers who have become a matter of public concern as they pose a risk of spreading coronavirus to Uganda’s countryside.

Museveni said that one of the possible solutions being discussed is ensuring that the truck drivers are tested before entering the country and once they are cleared, they are then left to enter the country.

“We need to solve the problem of land borders; the truck are now the problem. There are three issues which are being studied, one issue is to test these people at the border before they come into the country and having them wait for their results,” Museveni said.

He noted that this however depends on how quick the result can be got adding that this was not encouraged in the first place because it would cause a delay and vehicles would end up piling at the border entries.

“We thought the sample can be taken and the driver continues and when he continues he only stops at designated places and then called once the results are got. This was on condition that the driver doesn’t not interact with any person on the way, but it seems that it is not working,” Museveni said.

The President noted that the other alternative was to change drivers within the same company adding that, “The driver from Kenya would bring the vehicle and the company should have another group of drivers in the country, the new drivers would take over.”

Museveni added that some drivers have found the practice of having only one driver in the vehicle as good since the roads in the region are good so as to avoid turn boys.

The President was however opposed to the idea of blocking the land border entries to carvo, noting that the country still needs cargo into and out of the country.

“We have a challenge, we need the cargo, we need the goods to come in and also to go out, but at the same time we have to stop the spread of the virus,” Museveni said.

He further appreciated Ugandans for complying with the government guidelines as well being vigilant in the fight against COVID-19. 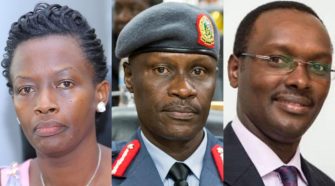