The Directors of the defunct Crane Bank Limited (CBL) led by the then Chairman Board of Directors, Joseph Biribonwa and the Vice Chairperson, Sudhir Ruparelia have challenged the unfair and illegal closure of their bank by the Central Bank in 2016.

Appearing before the Parliament Committee on Commissions, Statutory Authorities and State Enterprises (COSASE), the directors accused Bank of Uganda of not doing enough to save Crane Bank from the financial challenges it suffered but rather chose to have it taken over and sold off.

The directors admitted that indeed the bank was under capitalized but that it had taken relevant measures to turn around its distress which the Central Bank neglected.

Biribonwa told the committee that the shareholders took a four-pronged approach to try and resolve the liquidity crisis, including; more aggressive debt recovery, enhanced search for equity partners, inter-bank borrowing and borrowing from BOU.

“CBL sought a loan from BOU and first offered its branches as security, however, they were rejected by BOU. Meera Investments Limited then offered Kampala Boulevard as one of the third party securities for securing the loan to CBL,” Biribonwa said.

Biribonwa said that on 17th October, 2016, BOU responded and offered a loan worth Shs 79.2bn at an interest rate of CBR plus 5 percent margin but that BOU wanted only third party properties as security and rejected the branches.

He added that on the October 19, 2016, Crane Bank responded to BOU and requested for a period of 5 years within which to pay the loan.

The bank also requested to be availed the loan in USD and at a rate of 2% as well as  a waiver on the marginal interest since a high interest rate would deepen the crisis.

“It is worth noting that BOU gave DFCU an interest free loan, however, it rejected the CBL’s request for the same loan facility three months earlier,” Biribonwa told COSASE.

On his part, the proprietor of Crane Bank who also doubles as Vice Chairperson for the Board, Sudhir Ruparelia requested that the committee prevails over BOU and cause for a compensation given the manner in which the closure was handled.

“Bank of Uganda should return the bad book (written off/provisioned loan) that is being illegally collected by DFCU, which is valued at Shs 570bn. The bad book was paid for by the shareholders capital and there belongs to the shareholders,” Sudhir said.

Sudhir requested that BOU returns all the money that the shareholders advanced to CBL as shareholder loans.

“There should also be a valuation of the goodwill and business that DFCU took as a preferred buyer. DFCU got 46 branches, became the 3rd largest bank overnight and also got deposits worth Shs 1.35bn.”

Sudhir also requested that the receivership be terminated to avoid a scenario where Crane Bank remains in perpetuity receivership like Greenland Bank and that the company should be returned to its shareholders. 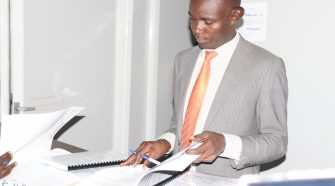