Cranes started this campaign with a 1-0 win against group mates, Cape Verde away from home last year. The other group game between Tanzania and Lesotho ended in a one all draw in Dar es Salam.

Uganda who lead the group with the maximum three points, are seeking to feature at the continent’s biggest tournament for the second time, after ending a 39 year jinx when they appeared at Afcon last year.

Orlando Pirates tactician, Micho Sredejovic, guided the boys at the last tournament in Gabon, but current coach Sebastian Desabre, is optimistic about winning the Tanzanians and maintain their top seat in Group L.

He however says Tanzania under Nigerian coach Emmanuel Amunike, is a good side whose ability shouldn’t be underestimated.

“The are a good team and have a good coach. But, three points against Tanzania are so important to us and we shall fight for the win,” said Desabre after the last training at Namboole yesterday.

“Playing Uganda will be very interesting. We know that it will not be an easy match but we will put lots of emphasis on our team work,” Mr Amunike said.

Since 1997, Uganda has only lost twice at Mandela National Stadium to South Africa and Togo.

All the summoned players including captain Denis Onyango, who plays for Mamelodi Sundowns are all in the camp with no reported cases of illness. 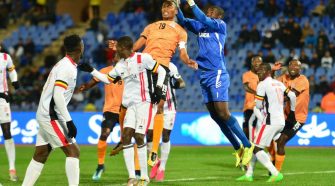