Uganda’s national football team, The Cranes, are a few inches away from gracing the AFCON finals yet again, after ending the 39 year jinx last year, when the boys played at the tournament in Gabon for the first time since 1978.

This is as a result of Uganda’s comfortable 2-0 away win against the Crocodiles of Lesotho on Tuesday evening in Maseru in Group L AFCON 2019 qualifiers, extending their group lead with 5 points ahead of second placed Tanzania.

Cranes goals came from HNK Gorica’s forward Farouk Miya, who scored a brace in the anticipated most entertaining Cranes’ games this qualification edition.

Miya’s first goal came in the 6th minute when he took a thunder strike inches from the 18yards box, before converting free kick in the 35th minutes following a foul on striker Emmanuel Okwi just outside the box.

Uganda has now won a double against Lesotho with a total of five goals to nil after thumping the Southern Africans 3-0 in Kampala on Saturday, thanks to Emmanuel Okwi and Farouk Miya’s goals.

Uganda has not conceded any goals since the start of these qualifiers and together with Bafana Bafana of South Africa are the only two nations which have not yet lost any game.

Uganda’s win puts them top of Group L with 10 points, 5 points ahead of Taifa stars of Tanzania who won 2-0 against Cape Verde at home yesterday. The Atlantic Ocean side are third with four points with Lesotho sitting bottom with only 2 points.

Two teams will qualify from each of the 6 groups for the final tournament in Cameroon next year and Uganda only needs a point from their remaining two games against Cape Verde in Kampala on November 16 and Tanzania away from home next year.

Uganda needs just one point from their two remaining group-stage games to book a spot in the 2019 AFCON finals in Cameroon. 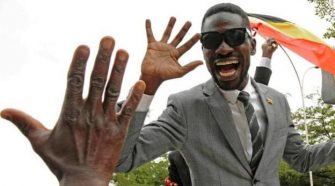