Vipers SC will find it hard to qualify to the CAF Confederation Cup group stages, after being held to a goalless draw in the first leg of the 2nd 1/16 round of the tournament, by visitors CS Sfaxien at St Mary’s Stadium in Kampala on Saturday afternoon.

The ‘Venoms’ went into the game with high expectations, eying only a win if they were to prove their worth in continental football as well as easing their qualification, but were disappointed when CS Sfaxien put a strong resistance.

In the 10th minute, Taddeo Lwanga played a one two with forward, Moses Waiswa, whose attempt was only deflected for a corner.

Fifteen minutes later, the hosts almost got a lead when Kenyan international, Innocent Noah Wafula was fouled near the 18 yards box, prompting a free kick, but Moses Waiswa failed to connect the ball into the net.

Vipers’ Yayiro Luyimba took a brush shot on target in the 29th minute only to be contained by the visitor’s defence, before Burundian international shotstopper, Fabien Mutumbora making a spectacular save which would have put the Tunisians in the driving seat in the 35th minute.

In the 45th minute, Ibrahim Kiyemba delivered a free kick but there was no one to connect to the ball, ending first stanza goalless.

At the start of the second half, Coach Michael Ouma introduced Brian Nkuubi in place of Bashir Asiku, a proof that he was thirsty for at least a goal.

Vipers most explicit scoring chance came in the 56th minute when Dan Sserunkuma, took a hard brush shot from just outside the area, but the opponent’s goalie saved it.

Ouma, made another substitution in the 56,th minute by introducing Abraham Nduggwa in place of Innocent Wafula.

In 57th minute, Vipers piled more pressure on to the visitors when Yayiro Lutimba crossed the ball from the left flank to Tito Okello, whose header on target was comfortably saved by Sfaxien goalkeeper.

Five minutes later, Ibrahim Kiyemba exploded forward from the right back position and cruised through the mid field, before laying the ball to Moses Waiswa only for his curled effort to be whisked away by the goalkeeper, ending the game barren.

The Ugandan Champions will in a week’s time travel to North Africa, for the return leg, from which only a win can see them seal a spot in the group stages. 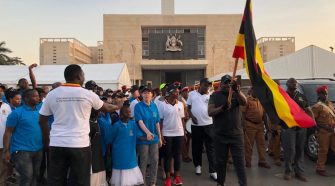