KIGALI – A Rwandan who is accused of participating in the 1994 genocide, in which over 800,000 ethnic Tutsi were killed, arrived in Rwanda on Tuesday evening following his extradition from Denmark.

Wenceslas Twagirayezu, 50, was handed over to Rwandan Police by Denmark officials at Kigali International Airport.

The suspect is accused of genocide, extermination and murder as a crime against humanity and he is considered one of the key perpetrators of the genocide.

“He participated in the mass killing and extermination of Tutsi, where together with others he attacked several places including a parish where more than 3,000 Tutsi had sought refuge and more than 1,000 were murdered,” Rwanda prosecution spokesman, Justin Nkusi said in a statement.

Twagirayezu was one of the top leaders of Coalition for the Defence of the Republic (CDR), a Hutu extremist political party, whose members the Rwandan government accuses of carrying out mass killings.

Twagirayezu is the second suspect to be extradited by Denmark after Emmanuel Mbarushimana who was extradited in 2014. Twagirayezu was arrested in May last year.

He has also been accused of participating in the killing of 1,000 Tutsis who were hiding at Mudende University in Kigali.
In September, an appeals court in Denmark made a ruling saying there was a possibility of an extradition.

The Eastern High Court in Copenhagen said Twagirayezu could be deported on suspicion of taking part in a massacre in a church and at a university where more than 1,000 people were killed.

Twagirayezu, who got Danish citizenship in 2014, has dismissed the accusations and said earlier that “if I’m being extradited, I will accept that my time to die has come”.

Twagirayezu, a former primary teacher in Rwanda who arrived in Denmark in 2001 is said to have been running an organisation in Denmark known as Dutabarane Foundation. 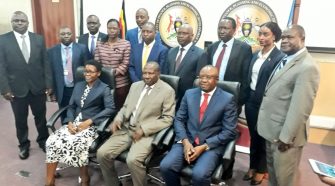