The Embassy of Denmark in Uganda has finally cleared the use of East African Passport a month after it was queried by the embassy as a non-binding document.

Over a month ago, there was controversy after reports emerged that the Danish embassy in Uganda had denied Visas to holders of the new East African Community (EAC) electronic passports.

However, government through the Ministry of Foreign Affairs was quick to refute claims.

The Ministry said the embassy of Denmark, like all other diplomatic and consular missions and international organizations accredited to Uganda were informed and issued samples of the new passports in December last year.

Government urged the public to be patient as the immigration authorities of the foreign governments update their systems.

Now, the Danish embassy has issued a statement announcing that the East African passport has been cleared.

“We are happy to announce that the new Ugandan East African passport has been cleared for travel to Denmark and can now be used for visa applications” read a notice on the official Facebook page of the embassy on Monday.

The embassy advised prospective travelers to note that as of 1 August 2018, all applications for visas, residence and work permits will be handled by a Danish Visa Application Centre on Lugogo Bypass in Kampala.

The e-passports that Uganda started issuing on December 10, 2018 intend to replace the old machine readable passports which are expected to be phased out by January 2021. 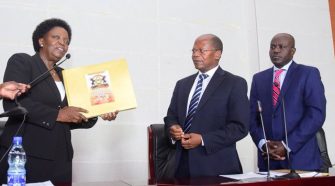