Mugisha Muntu’s opposition political grouping ‘New Formation’ has extended the dates for unveiling the official party name and symbols from the initial date of December 25.

The ‘New Formation’ was founded by Maj Gen (Rtd) Mugisha Muntu after he quit his former party, FDC late in September. He has since been recruiting new members for the party which he said will be inclusive. Former FDC Secretary, Alice Alaso was among the first people to join Muntu.

In a statement released on Wednesday, Mugisha Muntu said that the organization had submitted the documentation required to register (as a political party) with the Electoral Commission which is likely to be completed by December 31.

“We have been in the process of gathering signatures from across the country for the registration of our party. This process was completed and we handed all the necessary paperwork for registration to the Electoral Commission,” Muntu said in the statement.

The statement adds that on December 7, the EC began the exercise to verify the signatures provided.

“The Commission has publicly said that they intend to have the process wrapped up by the 31st of December 2018”.

The timeline given by the EC is six days later than Christmas Day when the official unveiling of the new political party was scheduled to take place as announced months ago by Muntu.

“As a consequence of this, we are unable to launch before the 25th of December as earlier projected. We however are continuing to make all the necessary preparations to ensure that the launch of our party can take place as soon as the Electoral Commission completes the verification process and have the party gazette”.

Muntu said that the unveiling of the party’s logo, name, policy and other instruments of identity will all be done once the registration certificate has be attained.

In September, Muntu told a news conference that unlike other political parties which have previously been formed along religious and ethnic lines as well as around individuals, his new party will be formed based on deep ideological reflection, clear policy positions and consultations.

“Over the next few weeks, we are going to embark on a participatory process of defining what this new formation stands for ideologically, our core values and our policy position on various issues,” Muntu told reporters in September.

He said this would be done through public engagement, engaging sector experts and ordinary Ugandans on the kind of country they desire.

He announced an online portal (newformation.ug) which will be used for purposes of connecting with citizens interested in joining the party. 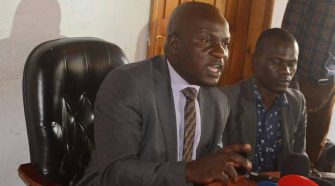