Two explosions that went off in Somalia’s capital, Mogadishu on Saturday have left 16 people dead, Police said. At least 20 other people were wounded after the impact of the blast.

A vehicle packed with explosives was detonated at a military checkpoint situated near the presidential palace,

Al-Qaeda-linked terror group, Al-Shabaab has claimed responsibility for the attack.

The second explosion took place just minutes after, reportedly in the same area.

Among the dead were three members of staff from the London-based Universal TV station. Awil Dahir Salad, a popular journalist also died in the incident while a legislator and a deputy mayor of Mogadishu were among the wounded.

“We will continue defeating terrorists in order to lead the Somali people to stability and prosperity,” he said in a statement.

Al-Shabaab militants have conducted a series of attacks in recent months, including one on a Ugandan army base in Bulamarer which left dozens dead.

In October 2017, Al-Shabaab, whose motive is to topple the current government, was responsible for one of the bloodiest single terrorist attacks since 2001 when a bomb killed more than 500 people in Mogadishu. 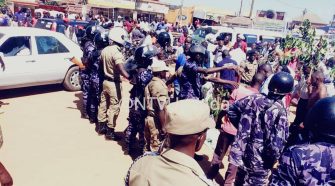 Teargas as Police Blocks Lusanja Evictees from Marching to Parliament