Opposition Chief Whip and Kira Municipality MP, Ibrahim Semujju Nganda has said Parliament should not consider compensating, Sudhir Ruparellia, the proprietor of Crane Bank, one of the banks closed by Bank of Uganda.

Semujju was Tuesday submitting on the report by the Committee on Commis­sions, Statutory Authorities and State Entre­prises (COSASE) which was presented to Parliament last week by the committee chairperson, Abdu Katuntu.

He says according to the report, Sudhir was one of the beneficiaries of one of the closed banks which was allegedly sold to him in hours.

“I am not convinced enough with recommendations of COSASE committee report to compensate some of the defunct banks like Crane Bank who benefited from an illegality,” Semujju told Parliament.

He argues that even if compensation was to be done, it should be the individuals who committed the illegalities to pay.

“I want to invite this Parliament to make very specific recommendations about individuals. The committee proposes that we pay, but why should we pay when people who committed the crimes are there,” he says.

“In my own view, the Governor Bank of Uganda and his entire team, by now now should be commuting from Luzira to appear before any committee or tribunal, because these individuals are the ones who have brought us to where we are. There is no way we recommend that we use taxpayer’s money to compensate for their mistake,” Semujju adds.

The Kira municipality on Monday told NTV Uganda that it would be unfair to compensate businessman Sudhir when he hasn’t fully accounted for some of the properties whose acquisition was according to Semujju, remains in question. The MP cited among others the property (formerly Shimoni Demonstration School) along Nile Avenue where Sudhir is constructing a commercial complex.

On her part, Sarah Opendi who represents Tororo as Woman MP said the Committee report is lacking and should be presented to the IGG for further investigation. She wondered why it does not spell out the names of individuals involved in the illegalities in the closure of BoU.

“I want to agree that what is reflected in the report doesn’t match the findings as well as what transpired on camera. People should be held responsible. As a Parliament, we can’t sit here without bringing those at fault to book,” Opendi said.

Busongola county north MP, Nzoghu Musabe reiterated that major concern is the discrepancy on the contents of the report and what was presented before the Committee during the probe.

He said that there is a lot of information that was left out deliberately.

However, MP Mbwatekamwa Gaffa said that Sudhir is an investor and
majority share holder of the defunct Crane Bank who should be compensated.

The debate is still ongoing 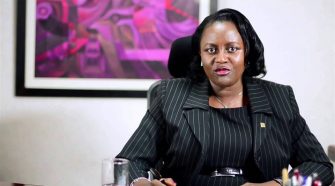