The Deputy Inspector General of Government (IGG), George Bamugemereire wants local governments and government agencies to set up local complaint handling mechanisms to handle some of the complaints of corruption raised by the citizens.

This, he noted while addressing the media at Parliament in conjunction with the National Debate Council (NDC) and Parliament of Uganda.

Parliament and NDC are organizing the 10th National Schools Debate Championship that is aimed at sensitizing young people of the effects of corruption.

Bamugemereire said that as the office of the IGG, 50 percent of the complaints they receive are matters concerning favoritism in recruitment, failure to pay pension which can be handled at the local level.

The Deputy IGG said that if districts have places where people can lodge complaints, many of them will not have to go through the lengthy process of visiting the IGG’s office.

He said that if this is done, it will enable his office to handle and resolve other big cases.

He added, “We are urging every ministry, departments, agencies and local government to introduce and set up local complaint handling mechanism”.

Bamugemeire as well appreciated the debate competition noting that this year’s motion coincides with the objective of the Inspectorate of Government which is creating awareness about the dangers of corruption to the country.

“NDC is playing an important role in interesting the young leaders in the fight against corruption and create awareness among them. If we can tackle corruption among youngsters, cause them be interested in fighting corruption,” Bamugemereire said.

The Executive Director, National Debate Council Dunstan Kakaire said the 10th debate championship will be held between from December 5 and 10 2019, at Gayaza High School.

Speaker of Parliament, Rebecca Kadaga will be guest of honour at the grand finale at Parliament.

“250 schools participated at this stage this year and out of these, 100 qualified for the 10th National Schools Debate Championship happening from December 5-10 at Gayaza High School,” the NDC Board member, Isaac Kigozi said. 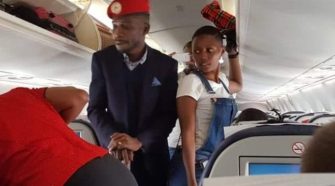 How ASP Pamella Kentaro got aboard with Bobi Wine to Entebbe