He was speaking to SoftPower News on Friday from Egypt, shortly after the draws of the forthcoming Africa Cup of Nations tournament in Egypt.

Uganda was drawn in group A alongside hosts Egypt, DR Congo and the Southern Africa nation Zimbabwe.

According to Desabre, the Ugandan team ought to prepare early in order to have good results in the tournament.

“It is my pleasure to know all the final teams in our group, you know we are challengers not favorites and we are going to play two strong teams, Egypt and DR Congo,” Desabre said on Friday.

He noted that playing the hosts Egypt is an opportunity for the team to show its ability, saying Cranes “needs three or four points to go to the next stage.”

He said the team should start preparations as soon as possible to be ready for the tournament.

In the recent FIFA rankings, in Africa, DR Congo is 5th, Egypt 8th, Uganda is 14th and Zimbabwe is 19th.

Uganda will be playing at the tournament which will run from June 21 to July 19 for the second consecutive time after 39 years without qualification. 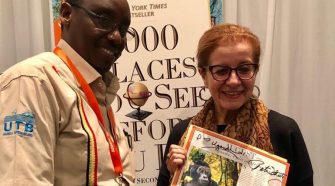