The Uganda Cranes coach, Sébastien Desabre has revealed that the team’s failure to move out of the African Nations Champinionship(CHAN) group stages for four times in a row, could be caused by an unseen problem.

Uganda was knocked out of the CHAN tournament on Thursday evening after losing 1-0 to the Warriors of Namibia and Desabre says he will provide a solution to that problem now that he has evaluated the players.

“I have evaluated my players. I want to win every match as a coach. We have not qualified from the group stages for four editions now. There must be a problem. My job is to find a solution”, Desabre said.

A seemingly disappointed Desabre who was addressing journalists after the match added that he will monitor the Azam Premier league to identify players for the national team.

This was Uganda’s second loss after losing to 3-1 to Zambia in Marrakech in their opening game.

Namibia and Zambia qualified from Group B with Uganda and Ivory Coast preparing to go back home after facing off on January 22.

Although many Ugandans were optimistic of the Cranes triumph on to the quarter finals for the first time in their history given the new coach, Uganda’s defeat has left many Football lovers wondering whether Desabre was the right man for the top job. 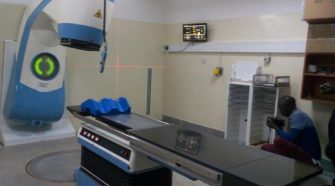