As it was highly anticipated, Rwanda failed to substantiate her allegations against Uganda and instead opted to flip-flop about the entire claims they have been raising for months.

After episodes of shunning the second meeting of the joint Ad-hoc committee on the Luanda Memorandum of Understanding (MoU) in Kampala, on Friday, Rwanda finally sent a delegation to Kampala for the talks which were held at Speke Resort Munyonyo.

The talks are part of the efforts to normalise relations between the two countries which have been frosty since February this year when Rwanda closed the main border with Uganda at Katuna and accused Uganda of incarcerating and deporting her citizens and illegal detention of Rwandan nationals. Uganda dismissed the allegations and said judicial process was followed to deport some of  the Rwandan citizens who were found engaged in criminal acts. Some of the Rwandan Intelligence Agents arrested in Uganda are facing the General Court Martial for Abducting Rwandan Refugees and Asylum seekers from Uganda and illegally repatriating them back to Rwanda. A notorious one known as Rene Rutagungira is one of those whose case has not been concluded.

Uganda hosts over one million refugees including Rwandans. The country’s open border policy is lauded by the UN as the best in the world. Uganda’s Minister of Foreign Affairs, Hon. Sam Kutesa has often said that Uganda would continue to secure and defend its territory as well as the lives of citizens, visitors and refugees.

In March, Rwanda issued a travel advisory restricting Rwandan nationals including students to cross to Uganda in what they said was aimed at safeguarding them from arrest and harassment by Ugandan authorities. However, a number of Rwandans have been shot dead by Rwanda Defence Forces (RDF) as they try to access Uganda through the two countries’ porous countryside borders in search for food. Prices of food and other basic commodities are said to have hit the roof ever since Rwanda closed its border with Uganda. This has made life unbearable for the ordinary citizens in Rwanda.

Presidents Yoweri Museveni and Paul Kagame signed a pact in July in Luanda, Angola, committing to regional cooperation and security. In September, the first follow up meeting was held in Kigali where Rwanda was asked to prove their allegations by providing a list of Rwandans detained in Uganda before the second meeting in Kampala. On her part, Uganda committed to verifying the information for the purpose of processing those named through due judicial process and releasing those, if any, against whom evidence of criminal conduct was not found as claimed by Rwanda.

The Kampala meeting was to be held in 30 days but Rwanda would instead on multiple occasions pull out, days to the scheduled dates. An impeccable source told this website then, that the postponement was after Rwanda’s realisation that the arrested Rwandan elements possessed Ugandan Identity cards and so, bringing out their identities would be ‘suicidal’, subjecting them to a catch-22 situation.

“We were advised against releasing the list to Uganda as Uganda would simply produce the several IDs and documents our people (intelligence agents) used to execute several operations within the Uganda territory while passing off as Ugandans. This would confirm Uganda’s concens about Rwanda,” the source told SoftPower news at the time.

Rwanda is said to use the several postponements to scheme how to evade the Kampala talks and yet remain seen as cooperative by the international community in resolving the stand-off while they use media to pile allegations against Uganda.

As such, a delegation is said to have been set-up and sent to Kampala with the sole purpose of frustrating and rejecting any efforts that would lead to resolving the impasse. This was indeed witnessed in Kampala when they turned down options that would verify their claims.

“They travelled over there with the sole intention of provoking Uganda to say all they have picked from the several Rwandan Intelligence elements arrested in Uganda. The mood here is mixed.  Security is disappointed that Uganda insisted on Rwanda providing the list of so-called detained ‘innocent Rwandans’ to a neutral verification team that would include Angola and Democratic Republic of Congo (DR Congo) who are the facilitators of the Luanda MoU. The people (Rwandans) are disappointed that an opportunity to make peace so they can go back to leading normal lives was lost,” a source in Kigali explained.

At Munyonyo, the meeting which was meant to kick off earlier, opened at around 5pm following the late arrival of the Kigali delegation. The initial program was to have the opening remarks by facilitators, DR Congo and Angola, after which a closed session would be held before heads of the two delegations addressed the media and issued a joint statement but this did not go on as planned.

“In the closed session, Rwandan officials were provided with pinning evidence of how their elements have been infiltrating Uganda’s agencies, something they openly accepted. They admitted that they train some Ugandans of Rwandese origin to infiltrate Ugandan systems,” a knowlegeable source told this news site.

“Minister Kutesa strongly reiterated that Uganda will not tolerate such acts and that Ugandan intelligence would continue arresting any Rwandan national found involved in activities that compromise Uganda’s national security. Kutesa said Rwanda must stop those acts immediately,” the source added.

This news website conducted an investigation three weeks ago where it was established that Rwanda also carries out her espionage and subversive activities in Uganda by acquiring Ugandan national identity cards (IDs) for members of their intelligence to masquerade as Ugandans as they go about their illegal activities under cover.

The shooting by Rwanda and killing of ordinary Ugandans and Rwandans at the shared border was another area of concern discussed. A man of Rwandan nationality was shot and injured by Rwandan security while he was returning from Uganda to the Rwandan side of the border with food. He was identified as Avugimana Peter, 29, a resident of Gishara parish, Lubayi sub-county in Gicumbi district.

In June this year, a man was shot by Rwanda military who were trying to pursue him as he ran towards the Ugandan border. The man had crossed the border to pick food from a neighbouring village in Uganda.

Last month, two Ugandans were shot dead by Rwanda’s security personnel deployed at the border with Uganda last month. Police in Rwanda accused the deceased of “crossing into Rwanda from an ungazetted border point.”

In the meeting in Kampala, Rwanda’s head of delegation, Nduhungirehe said the deceased were using “non official border posts at night and attacked the police and so, the police had to defend itself” but he failed to explain why police would shoot to kill unarmed suspected criminals.

His Ugandan counterpart, Sam Kutesa insisted that the decision by Rwanda to kill ordinary people was not necessary because the said crimes are petty.

“We think that should stop because some of these are very, very petty crimes that have been committed. The killings were unfortunate and condemnable and we hope that nothing like that happens again,” Kutesa said.

On Rwandans arrested in Uganda, the Foreign Affairs minister said that Uganda will continue guaranteeing security of all foreigners including Rwandan nationals in Uganda but hold those who threaten the country’s security accountable.

“We only deal with those who have commited crimes or who are a threat to national security,” he said.

Meanwhile, the Rwandan delegation claimed that since January 2018, Ugandan authorities have arrested and deported 1,430 Rwandans. The Rwandans who are known to parade, before media, every deported Rwandan have only paraded a handful. While they claim the deported Rwandans are tortured, they have not paraded any Rwandan with bodily evidence of torture.

This news site has it on authority that during the meeting held in Kampala, Uganda proposed a neutral team to verify the accusations both countries raised against each other.

“We have concerns. You too have made accusations against us. We need to come up with a mechanism to resolve this and we suggest that a neutral team acceptable to you helps us verify these concerns,” the head of Uganda’s Delegation, Minister Kutesa, said and suggested that Angola and DR Congo, facilitators of the talks, would be of great help in verifying the concerns.

However, the idea of a neutral verification team was rejected by Rwanda’s Minister Onduhugirehe without giving reason.

“Onduhugirehe said a neutral verification team was unacceptable. The entire room including facitators were surprised that Rwanda did not want their allegations against Uganda verified. That is how the talks flopped,” a source confirmed.

It should be remembered that the first talks in Angola that led to what is now known as the Luanda MoU were held after Rwanda approached Angola and raised several allegations against Uganda. Uganda which is known to want issues of the region to be resolved within the region’s mechanisms responded positively to Angola, a sister country that is a member state of the International Conference of the Great Lakes Region (ICGLR).

“President Kagame is the current Chairman of the East African Community (EAC). Every head of state in East Africa was surprised that he did not attempt to make use of the EAC mechanisms or convene a Heads of State summit to resolve issues with Burundi and Uganda but chose to pile allegations against Uganda in Angola. We were however alright, we said we would do anything for peace. Angola is a brotherly country and they have tried their best,” a source close to the talks told SoftPower News.

“As such, the presumed trust Rwanda found in Angola to solve the impasse prompted Kutesa to suggest that a neutral team compromising Angola verifies the allegations. Instead, Rwanda stood their ground and objected the idea, probably because a neutral team would expose their lies,” the source explained.

Rwanda also complained about Uganda’s media namely the New Vision and SoftPower News for “poking their nose in Rwanda’s affairs.” They however made no comment on SoftPower News’ report on their acquisition of an Air Defence System and Mi-35 helicopter gunships in preparation to attack Uganda through a proxy war from DR Congo.

The meeting would end without the two parties reaching consensus on a number of key issues. There was no joint communiqué issued.

President Kagame recently said he would raise the cost of those countries now termed by Rwanda as “enemy states” raising concerns in the region’s diplomatic corridor that Rwanda is not committed to peace with Uganda and Burundi and is probably the reason the country is opting for military means.

Rwanda Defence Forces are currently fighting in Democratic Republic of Congo (DR Congo) where Congolese accuse them of a number of deaths of civilians and pursuit to takeover the country’s vast mines. It is reported that the mineral wealth would then be used to finance several military operations instead of stretching Rwanda’s small economy.

Citizens of both Uganda and Rwanda took to social media to express disappointment when it became clear that no joint communiqué was issued after the talks in Kampala. 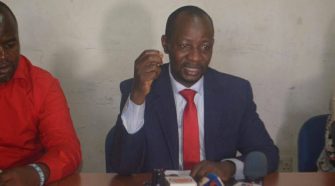 Semujju Blames ‘Tired Ministers’ at OPM for Mismanagement of Refugees