Some of the Makerere University students who were arrested on Tuesday by Police during a protest against the 15 percent cumulative tuition increment now detained at Wandegeya Police station, have deliberately refused to record a statement required for Police to release them on bond.

The 48-hour rule in the laws of Uganda provides for suspects to be presented to court in two days or else be released on bond.

But in an interview with this news website, Kampala Metropolitan Police spokesperson, Patrick Onyango revealed that students who recorded a statement were temporarily released but they are still holding others who objected claiming they await their lawyers.

He says if the status quo is maintained, Police will go ahead and prepare a file and avail it to the Director of Public Prosecution (DPP) spelling out clearly that those suspects refused to record a statement so the DPP can determines the next course of action.

Police has since slapped charges of inciting violence and participating in an unlawful assembly against them.

Onyango says some of the detained students were arrested while forcing their colleagues who were in lecture theatres and halls of residence to join them in the demonstration.

He revealed that Police’s preliminary investigations indicate that there could be a third party behind the demonstration.

“We intend to go back to the university to get more details on these students because we understand that some of them had already cleared their dues. There are allegations that some foreign forces funded the demonstration,” Onyango told SoftPower News.

He says the demonstration code named black Tuesday, was initially meant to only be held on Tuesday with female students don in black attire on the forefront, according to preliminary findings, but the foreign hand used the opportunity to fund the students to prolong the demonstration.

Onyango denied allegations that Police used excessive force while arresting the students. He says they used teargas to calm down the rowdy students and that some (students) also attempted to resist arrest.

“They were stoning Police officers and vandalizing university property with others sitting and burning car tyres in the middle of the road to block traffic flow. What did you want Police to do? We had to use accepted measures at our disposal including teargas. We did not shoot any student,” he explained.

On allegations of male officers arresting female students as opposed to the reverse, the Police spokesperson, said the situation dictated so.

“It depends on the situation. We can’t fold hands and stare at you while you break the law simply because there are no female Police officers in the vicinity. We use any officer present to arrest you and take you in our custody as long as he has taken to a legally gazetted area,” he said.

In 2018, Makerere University management proposed increasing fees by a tune of 49% and 91% but was contested by the students.

As such, the Guild leadership constituted a special committee with representatives perused the policy starting from July 4 and presented their recommendations to the university council on July 6.

They recommended that instead of the 49% and 91% increment in fees, there should be a uniform and moderate 15% increase in tution fees across all programmes effective 2018/19 for the next 5 years.

The students recommendations were received and passed by the University council. 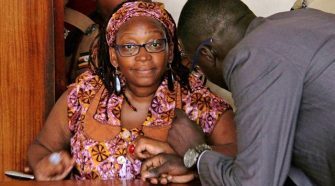