Hopes of held Tanzanian journalist, Eric Kabendera getting his temporary freedom further dwindled on Monday as the State preferred unbailable charges against him.

The freelance journalist was arrested on Monday last week from his home in Dar es Salaam by men wearing plain clothes who were later identified as police officers. Police would later explain that his arrest was to help in the ongoing investigations about his Tanzanian citizenship.

“We are holding him for questioning because authorities are doubting his citizenship. We are communicating with the immigration department for further measures,” Regional Police Commissioner Lazaro Mambosasa told reporters last week.

But the Tanzania Immigration Police said it had no case against him, at least according to his lawyers.

His lawyers would later file a case at the Kisutu Resident Magistrate Court in Dar es Salaam demanding his release. But to their surprise, as they appeared for bail application on Monday, the state slapped the accused with charges of organized crime and money laundering – all unbailable.

According to prosecution, on diverse dates between January 2015 and July 2019 in Dar es Salaam, and with other persons not before court knowingly facilitated a criminal racket.

The state also claims that Kabendera in the second offence failed to pay taxes amounting to Tzsh173.247 million payable to Tanzania Revenue Authority.

The state further accuses the journalist of acquiring Tzshs173.247 million, while knowing that the said money was the proceeds of a predicate offence namely tax evasion and leading to organised crime.

Kabendera’s investigative reportage stories which mainly focus on development, have appeared in both local and international press and won numerous awards with some of his work appearing in The East African, African Arguments Website and the British newspaper The Guardian. 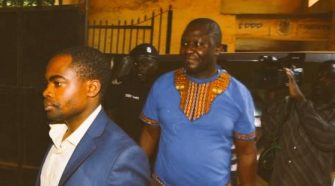