Doctors under their umbrella body the Uganda Medical Association (UMA) have suspended their planned industrial action that had been meant to kick off on December 16th.

Addressing the media at Mulago on Friday, the UMA President Dr. Ekwaro Obuku said the decision was taken due to the mutual understanding they have agreed on this morning in a meeting held with Ministry of Health, Public Service and Parliamentary Health Committee.

Doctors had threatened to resume their strike after they failed to agree with government over what what they refered to as ‘irreducible demands’ that had led them into a three weeks strike last month. The demands included salary increment, good working environment and provision of medical equipment in goverment health facilities.

Dr. Obuku explained that this time, suspending the strike has been done without a genenal assembly due to the costs and the festive season that seem to have led to travel of several doctors.

Dr. Obuku said industrial action would be resumed in the first quarter of 2018 once government fails to act positively.

Yesterday, the Doctors met Speaker Kadaga and addressed a press conference after the meeting reporting “reasonable progress” in latest talks with Government .

Govt Clarifies on Safety of Ugandan Security Guards in Iraq

After Being Thrown Out Of Parliament, Basalirwa Vows To Drag EC, Gov’t to Court 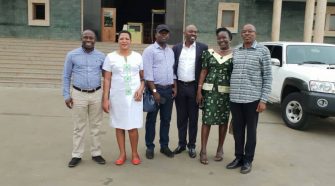