The International Criminal Court (ICC) is expected to deliver the ruling in the trial of Ugandan former LRA Commander, Dominic Ongwen, at the end of next year, according to the trial’s timeline.

The court is currently hearing from the defence witnesses and will in the coming few weeks hear from the last 5 witnesses. The defense case began in September of last year and a total of 51 witnesses have so far testified, some physically in The Hague-based court and others through pre-recorded testimonies.

In total, 116 witnesses have given testimony. These include local leaders NGO representatives involved in receiving returnees, former LRA leaders, former wives of Kony and Ongwen, UPDF and LDU members and expert witnesses.

According to Beti Hohler, an Associate Trial Lawyer at the ICC, the Prosecution will there after call rebuttal witnesses including a psychiatrist after which the defense will respond.

Among the issues that the defense has raised to firm up their case is that Ongwen was mentally ill between 2002 and 2005 when the alleged offences were committed. However, the prosecution disagreed with this and presented three psychologists from Uganda, Germany and U.K who argued to the contrary.

On November 18, the defense will call two of its witnesses (psychiatrists) to present their arguments, Hohler told reporters in Kampala on Friday. She was speaking at a briefing addressed by officials from the ICC outreach office in Kampala and those from the Office of the Prosecutor at ICC.

At the beginning of December, the presentation of evidence will conclude according to the deadlines recently set by the Judges.

“On 26th February 2020, the final witness submissions will be presented. On 10th March, both sides will begin to make their closing statements, then the trial will conclude,” Hohler said at a press briefing in Kampala.

“The Judges will then retire to assess the evidence and decide whether or not Ongwen is guilty. The decision will be taken in not more than 10 months. So, by the end of 2020 most likely”.

At the ICC, Ongwen, 43, an ex-commander of the Siniya Brigade of the Lords Resistance Army (LRA) rebel group is facing 70 charges of war crimes, including murder, sexual slavery and recruiting child soldiers.

Whereas the defense is fronting the role of spirituality as well as duress to justify Ongwen’s innocence, prosecution says it is satisfied with the evidence before it. Part of the evidence is from intercepted radio communications between Ongwen and the LRA leader, Joseph Kony.

Dahirou Sant, the International Cooperation Adviser in the Office of the ICC Prosecutor said that in one of the communications, Joseph Kony was heard asking Ongwen about an attack in Odek which he (Kony) had not ordered.

This, Dahirou said, is evidence that as commander, Ongwen made some decisions on his own and thus disqualifies the argument of duress.

Prosecution also argues that testimonies indicate that there were several instances where Ongwen would have escaped or surrendered to the government forces (UPDF), but he did not.

“We believe that elements of duress are not met. Ongwen was not under imminent threat or injury when he committed the crimes. He was Senior in the LRA and some of the crimes were committed when he was remote from Kony and therefore there was no threat that Kony could have posed,” Hohler said.

Related: Witness: Kony Once Ordered Children to Step on a Child Who Had Escaped Until He Died

The issue of spirituality has also played out prominently in the Ongwen trial. The defense has presented witnesses many of whom told court that it was generally believed in the LRA was always possessed by spirits which influenced his actions.

Some times, according to witnesses, due to these spirits, Kony was able to predict members who intended to escape, which is why they (including Ongwen) feared to escape.

But the prosecution maintains there were several windows that could have enabled Ongwen to escape, had he been willing.

Regarding sexual and gender based offenses, Hohler said there has been substantive evidence adduced by witnesses (Ongwen’s former wives) upon which to convict him. This is the first time an individual is being charged with “forced marriage” and “forced pregnancy” at the ICC.

One of the precedents set by Ongwen’s case at the ICC is that the perpetrator is also a victim of the same crimes he is accused of committing given that he was abducted and forced into joining the LRA as a child soldier.

Asked whether this could affect their case, Beti Hohler said that whereas the prosecution acknowledges that Ongwen was conscripted into the LRA at a tender age, the charges he faces were allegedly committed while he was an adult, in his late 20s.

Also Read: “Ongwen Was a Victim Rather than a Perpetrator” – Defence Tells ICC

“But that does not mean that Dominic Ongwen should not be held accountable for the crimes he committed as an adult”.

Jan 2015 –  Ongwen surrenders himself to the Seleka rebels in CAR and is handed to U.S Special forces. 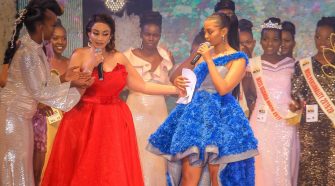 “I Don’t Mind Being Called Mama, No Mother Should” – Miss Uganda CEO