The outspoken parish priest for Kitanga parish in Kabale Diocese, Father Gaetano Batanyenda has cautioned the newly elected Archbishop of the Church of Uganda also Bishop of Mityana Diocese Rt Rev Stephen Kazimba Mugalu against compromise from the State.

Fr Gaetano says the new Archbishop is bound to face the challenge of State interference which he says could potentially fail the Archbishop in his quest to execute his duties.

While addressing reporters, Fr Gaetano said the Archbishop should consider working in concert with the House of Bishops but to also prepare himself to die like a martyr just like former Archbishop Janana Luwum did.

“Make sure you have the courage to say no to State interference. If you do that, you know the consequences of course. They will talk ill about you, they will castigate you don’t mind as long as you are doing God’s work. They might even kill you, but you will not be the first person to be killed. Archbishop Luwum was killed,” Gaetano said at a news conference convened at Grand Holiday Hotel in Mbarara.

He however appealed to the political leadership against standing in the Archbishop’s way during his service.

“If it’s to meet the President like we used to see, let all the Bishops be invited as a group to tell the truth instead of an individual going there for his selfish interests which makes them vulnerable to compromise”.

The 75-year-old cleric equated the background of Bishop Kazimba to that which the Biblical Jesus Christ lived.

“When I saw where the Archbishop-elect was born, I immediately equated him to Jesus Christ who was born from Nazareth. Born from Natete, Kampala in the slums and being a ghetto man, he must be knowing the pain of an oppressed person given his background,” he said.

He said the new Archbishop is God-sent Messiah.

“I was very happy when I heard that the Bishops of the Church of Uganda had elected a new archbishop in the name of Kazimba I didn’t know him but eventually, I came to know him through the media,” Fr Gaetano said.

He says the new leader of the Anglican Church was chosen through the voice of God and therefore he must follow the command of God.

“I want to pray that God who chose him should protect him as he serves his people without bending to one side”.

“I have high hopes in him, that he will be a voice to the voiceless and he will speak for the oppressed, meet those who have the authority to look after God’s people and advise them positively without fear or favor,” said the cleric who is also a strong critic of President Yoweri Museveni’s government.

““I want to thank Archbishop Ntagali. He has done a wonderful job. I want to congratulate the Anglican Church of Uganda most especially the retiring archbishop Ntagali for respecting their constitutional term limits and I think it’s one of the things that has brought peace in the Church of Uganda. I think others will also borrow a leaf,” Batanyenda 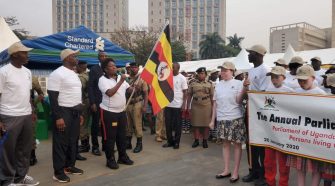