Opposition politicians affiliated to the Democratic Party (DP) bloc led by the party’s President General, Norbert Mao have opposed the proposal under the draft Coffee Bill to have all coffee farmers issued with licences as part of regulation.

Government is drafting a new law that seeks to regulate the growing and sale of coffee is in the offing.

The National Coffee Bill, 2018, seeks to ensure quality in the coffee sector and it will replace Uganda Coffee Development Authority (UCDA) Act 1991, which was only limited to covering the marketing and processing stages of coffee.

Framers of the draft law argue coffee growers are increasingly compromising on standards of coffee, Uganda’s biggest export crop, which affects foreign revenue prospects. This, according to government is attributed to harvesting of raw coffee beans and poor drying.

It comes at a time when Uganda is looking to grow its coffee production volumes from 3.5 million to 20 million bags by 2020.

The Uganda Coffee Development Authority (UCDA) will register all coffee farmers for purposes of monitoring and regulation.

UCDA will then supervise the land on which the farmer intends to grow coffee to assess its suitability.

According to Bill, the government will channel information or materials about coffee to only registered farmers.

However, DP’s Norbert Mao has opposed the move, teaming it as over regulation.

“The Uganda government has come up with a policy which is stated in the bill that requires that every coffee farmer must be registered and can only be allowed to grow coffee if their soil on their farm has been tested and found suitable,” he told reporters.

“As the DP block we consider this to be over regulation and we denounce it”.

Mao says that whereas DP supports; quality assurance, extension work to support farmers, regulating quality to ensure the brand of Ugandan coffee is promoted worldwide, it is important that farmers reject the proposed law.

He accused President Yoweri Museveni of cowing to pressure from the foreign coffee exporters to the disadvantage of Ugandan coffee growers.

“Foreign coffee exporter have ganged up and put pressure on President Museveni to turn and declare war on Ugandans so that the coffee sector is also captured, ” he said.

“Our message to Ugandans is – we cannot afford five more years of this kid of policies. We wish to denounce the Minister of Agriculture for putting his signature on this bill which fights his own people. Kalungu district depends solely on coffee growing. Why would the Minister do this?”

On his part, Dr Abed Bwanika, the President of People’s Development Party (PDP) which is now part of the DP bloc, says the law gives too much power to the Minister of Agriculture over coffee farmers which is dangerous.

“The law says the Minister can de-register you as a farmer from the farmers’ list. When he thinks you don’t mean the terms and conditions,” Dr Bwanika said.

“That means, if you are de-registered from the list, you are not going to be able not sell your coffees. It put too much power in the hands of the Minister to select who is the farmer in this country”.

Dr Bwanika said government’s interest should be in regulating the quality of coffee but not to determine who a farmer is.

In the 2017/18 financial year, Uganda’s coffee exports brought in USD 492m compared to USD 351m in 2015/16. Government attributes this to the replanting program that has been ongoing over the last 10 years to replace the stock lost to coffee wilt disease, and a national plan to increase production. 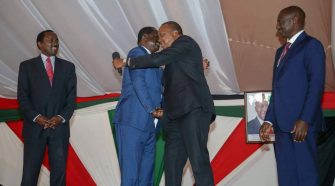