Democratic Party, the second biggest opposition party in the country has called for postponement of the forth coming 2021 general elections in the interest of public safety.

The proposal was aired by the party president, Norbert Mao who had led a delegation of party leaders to the committee of Legal and Parliamentary Affairs to offer their position on the new elections guidelines that were issued by the national Electoral Commission (EC) recently.

According to the new elections guidelines, there will be no mass campaigns on all elective positions and campaigns shall be held scientifically through the different digital platforms.

While releasing the guidelines, the Electoral Commission Chairman, Justice Simon Byabakama noted that the guidelines were arrived at after several consultations with the Ministry of Health expects and are aimed at ensuring that the elections go on without conflicting the health of Ugandans given the prevailing COVID-19 pandemic.

Despite holding scientific campaigns, the country is headed for a conventional polling on the day of voting and Byabakama assured Ugandans that several measures shall be put in place to ensure that Ugandans are safe during voting.

It’s upon this basis that the Democratic party President noted that there is no guarantee that Ugandans shall be safe after elections and this would undermine all the efforts and sacrifice that they have so far put in.

Mao said that the polling days are enough to cause the spread of the virus shoot high since it calls for a lot of human contact.

The elections should be postponed for public health reasons, because we can’t predict; you are going to have over 500 people sharing pens to tick, basins and tables to touch, polling officials will be sharing tables, benches, consulting frequently, leaning on each other yet breathing, yet nobody knows their status, Mao expressed worry.

The DP president further noted that it will be hard to have free and fair elections with digital campaigns given the fact that some districts in the country have no radio stations while others receive no signal from the available radio stations especially the border districts.

Mao however noted that in the event the elections are to take place, government should first ensure review of the current electoral laws to provide for scientific elections.

He also called for a national dialogue bringing together all stakeholders so as to discuss and decide on how credible, free and fair elections can be guaranteed in the prevailing circumstances. 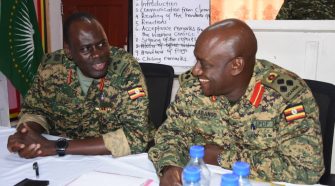