After several months of stalemate and ping pong within the Interparty Organisation for Dialogue (IPOD), the Democratic Party (DP) president, Norbert Mao will hand over the organization chairmanship to Forum for Democratic Change (FDC) President, Patrick Amuriat Oboi.

DP’s tenure at the helm of the organization that brings together all political parties with representation in Parliament ended in September this year.

Since then, IPOD activities have faced a stalemate and the two parties DP and FDC have accused each other of failing the organization.

DP has since accused their counterparts of expressing no interest in leading the organisation which they say is evident by a lack of commitment.

DP feared that FDC would fail IPOD once they take over the leadership of the organisation since they have been consistently absent in a number of IPOD engagements citing absence of leveled political playing field.

On the other hand, the FDC leadership has since maintained that they are ready and willing to take up IPOD leadership and have accused DP of hatching plans to deny the Chairmanship which is held at a rotational basis.

There have been several engagements between the two political parties aimed at resolving the differences for the good of the organization.

“I am pleased to inform you that as announced after the end of the term of the Democratic Party at the helm of IPOD, I have been carrying out consultations with stakeholders. I also held a very fruitful meeting on the subject of IPOD leadership with Amb. Wasswa Birigwa the FDC National Chairman,” Mao said in the letter written to the IPOD Executive Secretary, Frank Rusa recently.

Mao revealed that he would later hold a meeting with the FDC party president, Patrick Amuriat to have all the issues resolved.

The IPOD Secretariat has however revealed that finally the official handover ceremony will be held on Wednesday November, 2019 at Fairway Hotel in Kampala.

IPOD secretariat Communications and Public Relations Consultant, Sheila Kangwagye said the ceremony will begin at 9am and the formal handover will be preceded by a presentation by the Retired Chief Justice, James Ogola. 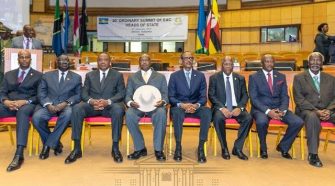