Democratic Party (DP) has mocked President Museveni that his move to only guarantee security of legislators other than the entire population is an indication that his time is up and should instead leave power.

Speaking to journalists at the party headquarters at City House in Kampala, the party Spokesperson, Kenneth Kakande said that President Museveni’s directive of purchasing bullet proof vehicles for MPs and giving them military sharp shooters so as to enhance their security is farfetched, unrealistic and a waste of tax payer’s money.

“We believe this is a waste of the tax payer’s money which funds would have been used to improve provision of services in especially schools and hospitals,” Kakande said.

Kakande suggested that, “The real security that the President can give to the MPs is revisiting the Constitutional Amendment Act like he did to the Mobile Money.”

According to Kakande, the President has failed to manage the security of the country due to his long stay in power which has continuously angered citizens.

“We are the only ones telling Museveni the truth that he needs to retire which is the only protection he can give to himself, his family and the MPs,” Kakande said.

“The truth that Museveni needs to know which can’t be told to him by those next to him because they are just bootlickers is that the curtain has fallen and it is time to leave the stage.”

“The President and the security organs in the country have no capacity to protect MPs or Ministers who are under threat, that is why the late AIGP Felix Kaweesi was gunned down in an armored vehicle with guards,” he added.

“The president could not protect Kaweesi, he can’t protect an MP, given the manner they are being shot down; the only protection he can accord them is to revisit the constitution amendment Act.”

In a letter to the Minister of Finance, Matia Kasaija, the President directed for immediate purchase of a fleet of 4-wheel armored vehicles and provision of army sharp shooters to enhance the security of MPs.

This followed a request made by several legislators during a meeting with the President they live under threats.

The MP’s call followed the gruesome murder of Arua Municipality MP, Ibrahim Abiriga on his way back home in Kawanda. 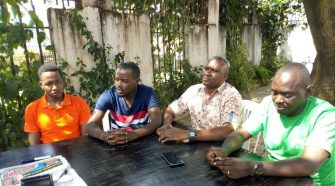